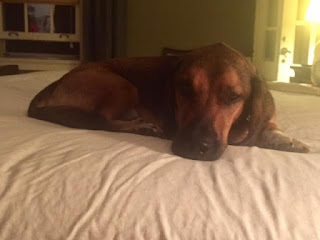 It's been a year and three days since this man came into our lives.

Maybe a little longer  - as we saw him before he acquired us.

It really seems so much shorter than that. It almost feels like 2-3 months since he's been crashing at our house.

The Little Man (one of my names for him), has come a long way in said year. He no longer tries to steal Sophie's fud - not that he can get to it.  He doesn't turn over area rugs or chew on them. He has somewhat access to our shoes, yet no longer eats them....or my belts....or his leashes.

His manners are better......though he has a way to go with jumping on folks. I wish he'd stop his-once-a-day lunge at Sophie. And I can do with out the wanting to get to deer and skunks. I'm somewhat ok with the squirrels and bunnies.

Shep's mouthing is a thing of the past too, as is his semi-aggressive behaviour when we used to tell him 'n-o'. We still use that word, but sparingly. We have other commands to get him to quasi-do what he quasi-wants.

I wish he were better with other dogs. He used to be. I want him to be. But anymore about 50% of the time he is just kind of a dick.

We cannot get within 300 feet of a small dog from down the street before he is just apoplectic. We haven't actually talked to Ken & Ron for months....as we cannot get near to them. And he's now taking on the Rhodesians.....so Suzanne and Dan time is extremely limited.  It's a bummer.

The dog walker says he's a big dog in a little body........and you just can't change that. I beg to differ - though I know I'm doubting the word of a lesbian.....and you really don't wanna fuck with those.

Shep is a super good sleeper. He konks out right between 710 and myself...even has his own pillow, because....well.....he's Shep. His 04:30 toss and turns and kicks have ceased, though he still rouses me around 05:00-05:15.  And instead of jumping down and doing lord knows what downstairs while I dress, he lies in bed until I'm done and summon him.

He makes us smile and laugh daily. He is so attached to 710 and vice versa....it is great to watch. I know he loves me too, but I'm just the 05:00 and the 17:30 poop-picker-upper-dad...and the dinner and breakfast guy.  Trust me, that's good enough for me. Whatever makes his life easier.

Shep has brought joy into the house and I love seeing how much of a "dog person" 710 has become. He was right that Petey was a good starter dog for us, and that helped us right to our Little Man.

Awwwww - can't believe it's been three years!!! Wow - so glad he's a part of your family, and I love seeing the updates and pictures of him.

He would probably make Holden & Harley scream and run :)

I miss a day and I miss this. What a joy, congrats!