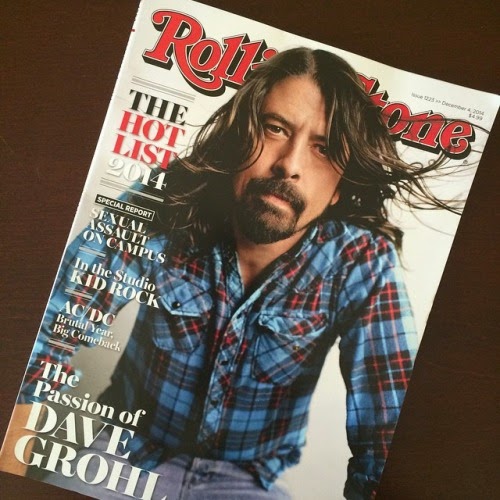 I'd have used "Rape Me" by Nirvana for this post, but apparently I squandered that one back in 2009.

No worries. I got it covered.

On FB two days ago, I was taken to task for not being "respectful" to the victim or story of rape on campus that was covered oh so poorly in Rolling Stone's last issue.

I said nothing about the victim - respectful or otherwise - but commented that with Rolling Stone's clear fuck-up in "reporting" and that they named U2's newest disk 'Record of the Year', the magazine has lost all credibility.

And yes, I put "reporting" in quotes.

RS was once a decent magazine that actually covered political and social issues quiet well. Without them - right or wrong - you'd never have gotten the movie / story of Karen Silkwood. And even a few years ago the interview that brought down General McChrystal for talking smack about his Commander in Chief.

But they laid a big turd with this story. I will go on the record, I have not read it. Nor do I actually feel the need to now.

The author - I can't say reporter, because she didn't fully report - might have had some great facts and anecdotal evidence on rape culture on college campuses. There is no shortage of it, from the woman at Columbia carrying around the mattress on which she was raped until her rapist was expelled or from the NYT front page story of rape at Hobart and William Smith College.

But said author focused on a student at UVA. But at some point she just became a storyteller and not a reporter.

Underlying facts were just plain wrong - all given by the victim and never sourced as truth or not.

Let me clarify: I am not blaming the victim here.

Rape and assault horribly traumatic events. But the details conveyed (or at least printed) were just incorrect. Jackie may have been confused, as any trauma would leave you disoriented. But there was no party of the night in question or at the place in question. The physical layout of the fraternity house is not consistent with the incident reported. Even that it was a pledge event was incorrect, as it was at a time when there were would be no pledges.

None of these were checked out by RS's writer. And mostly at the request of the victim, as she didn't want to see any retaliation by having others interviewed.

And here lies the problem - at least with me: if you're going to go to print in a national magazine with a story on rape culture on campus, you better make sure you do your homework.

I would say if we've learned anything from invading Iraq in 2003, it would be for reporters and the public to not take whatever is handed to them as fact. Make no mistake, I'm not comparing Jackie to Cheney & Co.

I do fear the inaccuracy of reporting. Or of witnesses, in regards to the law. Here is Cleveland, we've had four people exonerated of a murder due to false accusations  - and the four spent between 25-39 years in prison.

RS's original retraction pretty much put the blame of the inconsistencies on Jackie. They updated that retraction to negate the earlier one, but the damage was done.

Now, a magazine article is not a court of law, though many will be happy to try to determine guilt or innocence without a judge or jury. But it is unclear how much damage this article might do for campus rape discussions.

Granted, right now folks are talking, but more about Rolling Stone than the bigger picture. Rapes are incredibly prevalent on many a campus. Women are under reporting them and administrations are horribly guilty of admitting they happen, as they affect enrollment and the giving of alumni funds.

My wish is that this sham of an article pushes the agenda forward anyways. I'm not sure how it will do that, but I wish for something better.

And while they're at it, Rolling Stone can retract that U2 Album of the Year pick too.

the last issue of RS that I purchased was the john lennon cover. 34 years ago this week. I still have it.

And Blobby, you're right about RS once being kind of a bastion of journalistic integrity.

How they biffed this story would make a killer story.