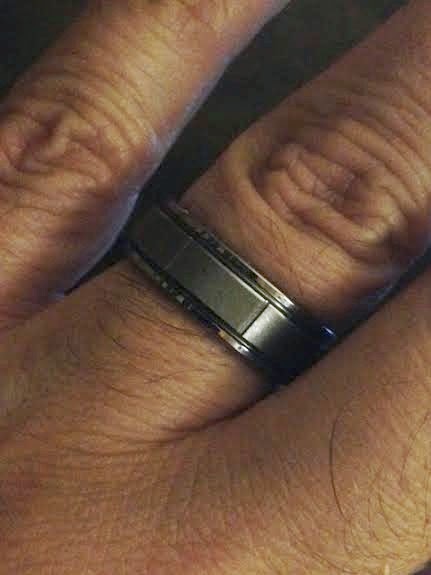 Seven plus years ago I wrote about 710 and myself getting rings, instead of iPhones, as a sign of our love.

Silly me. Silly us.

In that seven year time, I've gotten three iPhones. Four if you count the one I lost after our wedding. I still haven't made the upgrade to the 6 or 6+, but it is under consideration. Hell, if I wait five more months, the 6S will be out.

And in that seven year time frame, we did get married, but no new ring. Not that I wanted a new one. I was very happy with the one I selected and wore daily. Granted, I would take it off to work out, as my girly slim piano-playing like fingers would swell and make it uncomfortable and lifting had scuffed that sucker something awful.

But about a month ago, after taking Petey on a long walk, I noticed the ring was not on my finger. My digits might be girly dainty slim, but I never really had the ring just fall off. But lo and behold, I could not find it.

I tried not to panic and figured I just took it off to wash dishes and forgot or something. But no. Nor was it in the car - at least that I can tell. Those damned new-fangled electronic seats. Sure you can drop something under there easily enough, but with all that hardware it is impossible to  fine, let alone retrieve a thing.

Petey got two more walks that week, the exact same route we took before - even though his tugging told me he wanted to go a different way - because I thought for sure we'd stumble upon it.  You know, since there were only two feet of leaves everywhere. Oh and on the day of the disappearance, we took a hike through the woods too. Along a lake.

Well, except the needle was my ring and the haystack was a 1.5 mile Mother Nature trek.

And of course, Mother Nature doesn't have a lost and found, so no one turned it in to....well.....no one.

Oddly, I felt naked without the ring. So, it was back to the jeweler for us. Or me, to be more precise, though I dragged 710 along.

I could have gotten the same ring, or same style ring. But if I'm getting new, I saw it like getting a car, get something different, not just an update from what you were already driving.

Palladium is nice, but it's pricey. It's a precious metal, dontcha know. A precious metal that still gets lost in the woods which someone probably found and took to Luigi the Pawn Broker so they could score their next fix of heroin. If Philip Seymour Hoffman were still alive, he'd be Suspect #1 !!!!!!

This time I went with Tungsten. Yes, the blog title here is Titanium, but honest to g-d, there are no songs in my collection (or dare I say it, in anyone's collection) that has the word 'tungsten' in the title. And titanium was on the short list of ring / metal options.

Tungsten and Titanium are man made alloys and a lot cheaper. At least by half. And yes, that was one reason. Apparently this situation has taught me that jewelry is not forever, so I'm not going whole hog on this. Alloys are a lot tougher too - one reason I didn't get it the first go round. Emergency Departments can't get it off your finger easily if there's an accident, where most ring cutters can get gold, platinum and the likes off in a minute.

But I'm not anticipating (anymore) the need for an emergent ring cut-off scenario.

Because it's tungsten, it won't ever (allegedly) need polishing. It won't scuff. The bright parts will remain bright. With the new ring, there is a little bit of a design on it......as you can kind of see.

With the new ring, I also got a new inscription to include Petey's initial. So now I have Kylie, Tovah, Sophie and Petey (with additional room if needed for others) and of course, 710.

And with all my chutzpah for taking pictures where and when I shouldn't, I could not bring myself to ask Little John to take a picture with me.

A week after selecting and ordering, a ring is back on my finger.

As important as it was to me to have the symbol for myself, it was equally, if not more, important for others to see: a certain validation of our relationship.

All I know is, even with working out now, I have yet to take it off.

Email ThisBlogThis!Share to TwitterShare to FacebookShare to Pinterest
Labels: Jewelry

I understand how you feel. I love wearing my wedding ring, and if I accidentally leave home without it, I feel 'naked' all day. However, I'm not wearing my original wedding ring. A couple years after getting it, Spouse & I capsized a canoe in the rapids. After we returned to the cabin and got into dry clothes, I realized the ring was gone; presumably it came off in the river. Fortunately the store still carried the same, simply gold band so I replaced my original with an exact duplicate.

One of the reasons I remain unmarried is I am certain to lose the ring within a week.