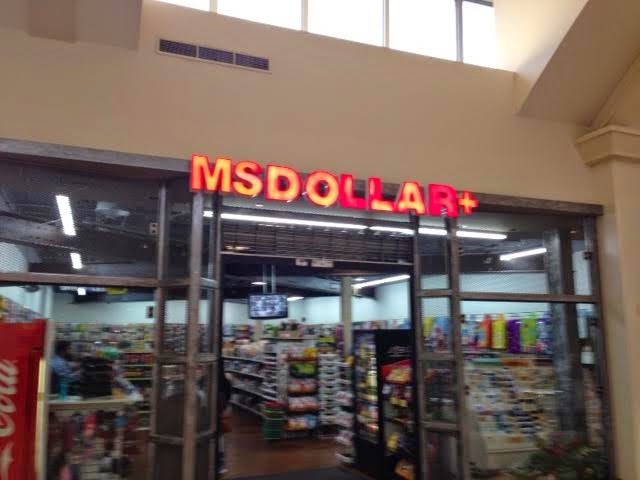 Two days ago I saw the sweetest and possibly saddest thing I'd ever witnessed.


I was out running errands and doing some holiday shopping for my sister's kids. First off, kids are very specific about what they want and not fucking shy about asking for it regardless the price. Sometimes I'll play along, sometimes not.

This time, not. Exactly.

What my sister requested was too late in coming to get it for the holiday, so before just getting her a gift card, I thought I'd try "the mall"!

First I tried the good mall. It had kiosks that sold iPhone covers, but not as one as ugly as what was requested. So I took a chance on the absolute shittiest mall in town. Ugly mall should figure ugly products, right?

They did not have what I was looking for. But to be fair, they didn't have anything for which anyone would look.

The mall, in its heyday, was a sad sack. And we were well beyond its prime, though I haven't been in there for years.

As I relayed this story to Becky, she thought I could find something at Claire's Boutique. As if.

Claire's would be a huge 'get' for this mall. Every store was a lesser version of a real store. Gone was Starbucks, FYE, Old Navy or something as high-brow as Five Below.

Let's just say, the anchor store is JCP.  They didn't even have 'the Dollar Store'. What you got what you see in the title image.

I stood there for minutes trying to figure out what it meant.  Ms. Dollar +?  Miss Dollars?  I don't know what the fuck it was, or supposed to be. I didn't go in.

No but if you need a glittery 4th rate prom dress to pass off as a NYE get-up, then this is your mall. If you need your acrylic nails done or have your weave fixed, this is the place. Of if you need a Lenscrafters - which is the only other name brand anything in this mall.

Even the food court was suspect. You'd have killed for a Sbarros here. But no, you got the no-name pizza by the slice establishment. There was a mid-eastern food place, but you'd kind of hope a suicide bomber hung out there, waiting to take out the entire place.

In the food court itself - the seating area - the cloth backing of the banquettes are torn or worn out. There were a total of 7 people sitting there eating some kind of food.

I am not a proud man, it was nearing 13:00 and I was starving. I knew it would be a mistake, but I got the Chinese food.  Eeek.

Oddly enough, this is not the sad part of the story. Though make no mistake, it was sad. On many levels.

As I was taking my 'food' to a table, I'm in danger of running into two of the few folks in this dump of a mall. Both were heavier-set, looking a little worse for the wear, in general. The man was African-American, the woman, Caucasian.

Like playing a game of chicken, we veered away from each other at the last minute, me taking my seat (after checking the seat!) and they went a few tables away, though they had no food.

Now normally, I have my camera at the ready. I take pictures of just about anything absurd, but nothing about them seemed out of the ordinary.

Then out of the corner of my eye, I see him kind of looking my way, and then he goes down on one knee. His hand comes out of his Member's Only (like) jacket pocket with a ring box. She does not seem phased. In the slightest.

Of course, maybe he didn't buy it there.

If not, then why oh why would you pick a basically abandoned food court to propose marriage?

OMG - this wasn't where they had their first date, was it? That just now crossed my mind.

Both were probably past child bearing years, so they save themselves the embarrassment of telling their kids that "daddy popped the question near where Dog-on-a-Stick used to be".

The woman took out her iPhone and snapped a pic of her ring. Becky admonished me for not noticing what the ring looked like. I'm a bad homo.

She then got on the phone and made some calls. It all seemed pretty underwhelming, as now I could not turn away.


And sad that I took no picture of him on one knee. On a floor, which lord only knows the last time it was mopped.

As I made my way out, I did pass Santa's Workshop.

No surprise here. It was sad too. Two elves, sitting doing nothing, as no one was around to tell the big guy what they wanted for xmas. So St. Nick opted to kill time himself. 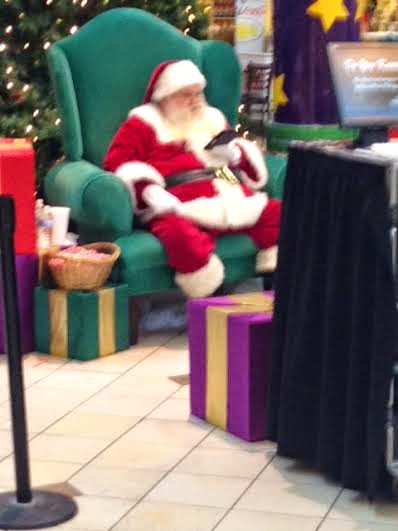 I'm guessing he's not checking his list once or twice. He's reading Fifty Shades of Grey or checking his Tinder account.


*made-up name, since I have no idea.

Email ThisBlogThis!Share to TwitterShare to FacebookShare to Pinterest
Labels: Love

WOW! how depressing. did you get sick from the "chinese food"?

David Sedaris took over your blog.

"daddy popped the question near where Dog-on-a-Stick used to be".

I'll bet you He's on Grindr.

yes, I thought it sad too.

Maybe he got that ring at Krogers

I'm surprised you didn't run into The Scrooge and Mr Grinch.