a Dollar Short of Happy 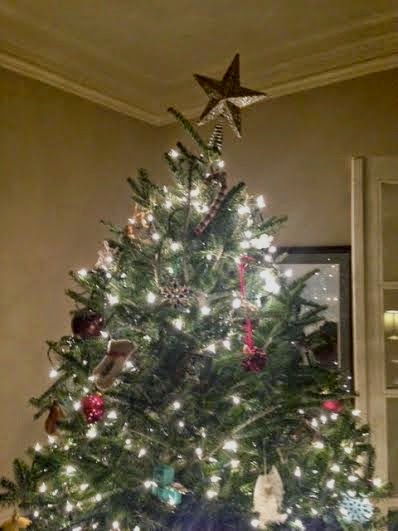 I hope everyone had, or is having, a nice holiday today.

Our tree this year is pretty much a metaphor for the year itself. Or at least the holiday season.

I'm sure it could be a plethora of reasons, but I've had a harder time getting into any good cheer. And g-d knows, decorating went by the wayside.

The tree is a little smaller than usual, but the selections weren't that great - at least not compared to what they were charging. And we had no good cut to place a star - hence the droopiness.

Don't start me on the lights burning out.

And the tree was all we did. Nothing else came out of the basement and actually we were fine with that.

Everything was left until later in the season and then everything felt rushed or we just opted to let certain things go. We did do cards this year. That's always been a spotty commitment for me, sad to say.

The week before the holiday, we went to Washington DC for fun, frolic and food (more on that in a later post) and then to visit 710's parents.

We got back right before the holiday. See - the beauty of the blog is you can pre-write stuff and have it schedule to publish. Or if you're me, you could forget to hit 'publish' and then get a text from Morty telling me there was no blog posting. Ooops.

I'd say 85% of my getting presents for nieces and nephews happened two days ago. And it didn't bode well for me that I worried Petey was getting sick again.

Yesterday started off at the vet. I was 90% sure he was having a bad bought of tracheitis, but since he has been so susceptible to pneumonia, and we were going into a holiday, we didn't take the chance. Ruckiry (not Jon's boss), his lungs were clear, but his trachea was and is bone dry. The dry air isn't helping, so he's on additional steroids and a cough narcotic. And we have gotten the vaporizer out for him.

The 24th was our day - as you might remember from years past. It is my mother's and a brother-in-law's birthday. We just do a joint celebration - which until this year also included my dad's birthday too. Lots of food and never enough booze - mostly because I know I have to drive home and can't be that inebriated, and it's not worth staying over my mom's house, love her though I might.

Actually, the drive home sucked. Winds were gusting at 60 miles per hour and it was hard keeping the car steady. All I needed was to be stopped for wreckless driving because of wind and get a DUI.

There was a lot of food, as always, but this year, I can't say I enjoyed most of it - including what we made and brought (more on that in a later post). That's not to say I didn't fill up on crap. And beer.

Who knows what today holds.

710, Petey, Sophie and I will lounge around this morning. Someone is getting a water buffalo horn, because he was so good......and no, it's not 710. But we're happy just to watch him and make sure he's resting comfortably and recovering nicely.

Of course, 710 and I will exchange our gifts. It's a low-key day for us and that's just fine.

And this weekend should be good. Heading to see friends - even if it is just for a day.

Anyhoo......everyone have a great day. A great holiday.

I like your Charlie Brown tree! A less than perfect tree says to me, home.

"Perhaps a movie. Perhaps Chinese food for dinner. Sadly, probably some laundry." = this sounds like how my day will go too. although in mah hood I have a choice of chinese, japanese, indian, vietnamese, or thai.

I did my 15 cards, put up the tree, and put the electric candles in the windows. that's it; I am NOT an interior decorator and I just don't care.

happy holidays to you, 710, and the furkids; get well soon, petey!

Happy Happy Christmas.
We, too, do a low-key version and that's how we like it!

I hope the rest of the year is splendid for you.

Glad its not just me that's having an 'off' Christmas. (Maybe because Thanksgiving was so late and there were fewer days between it and Christmas?) We did not put up our big tree this year, but opted for a much smaller pre-lit tree I found in the garage. I managed to hang 3 wreathes, but that was the extent of the "decorating" this year. We always travel for the holiday and stay at my mother-in-law's, which is simultaneously convenient and difficult, for multiple reasons. Pretty soon it will be over and we'll go back to our regularly scheduled programming.