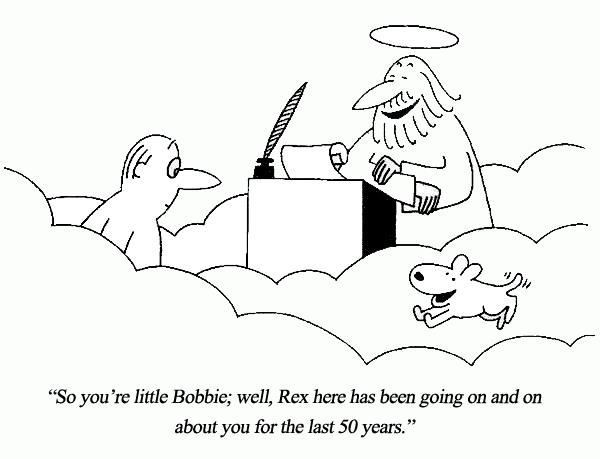 I don't know if Heaven exists and if it does, I don't know what it would actually be like. I mean, who does, really???

I'm going out on a limb that it is not for physical beings to be on clouds with wings and harps. Doubtful there are pearly gates too.

I know I don't believe in infallibility. And if that exists, I certainly do not believe it can be obtained by a bunch of men in red dresses voting another guy into "office" of pope and making him incapable of being wrong.

Of course, the joke is, the folks that elected Pope Francis - or some of them - don't find him infallible. Cardinal Dolan, for one, hasn't taken heed for Francis' edict on being nicer to homos. Nor have many U.S. clergy. So they're hypocrites right off the bat.

Still it was kind of cool that Pope Frank said that "paradise is open to all of g-d's creatures."  ....except  for the fact that he didn't actually say it.

Religion News Services is debunking that rumour that Francis said this, but it was actually uttered by Pope Paul VI back in 1978. The actual 'retraction' headline started with: "Sorry Fido......"

While the articles out there seem to convey that dogs and cats do not go to Heaven, I don't see why not. If one pope says 'yes', and he is / was infallible, do other pontiff views discount their predecessor? If so, doesn't that make the previous head of the Catholic church fallible.

Of course, if Heaven exists, why would I want to go, if Kylie, Tovah, Sophie and Petey weren't there?They were / are such trusted companions, who else would I rather spend eternity with - I mean, except the Rock.  Oh, and 710, of course.

One thing I'm sure of if there is an afterlife - no need to clean litter boxes or pick-up dog poop. They have to have those functions fixed up there, right?

Naturally, the pope(s) can be wrong - regardless of their little He-Man Woman Hater's Club edict. And we could be left with the Simpsons explanation of who, and who does not, gain access to Heaven.

Just on a point of accuracy, Blobby, the 'Holy Father' is only deemed to be infallible on matters of doctrine or morality explicitly proclaimed 'ex cathedra' (literally 'from the seat of authority') There have, in fact, only been two (or three?) such pronouncements since the belief's establishment in the mid-19th century - both concerning the Virgin Mary, the first being that of the Immaculate Conception (which is often erroneously confused with the Virgin Birth), the second being that her physical body did not die but that she was assumed BODY and soul into Heaven, something which I bet many senior Catholic clergy have been regretting was said ever since.
A particular difficulty is whether the doctrine of infallibility in such circumstances is itself infallible when it was not specifically ordained to be so. That conundrum never been convincingly resolved.
The idea behind Papal Infallibility , rare as hen's teeth though such 'ex cathedra' decrees are, is that 'God' would never allow His own, 'uniquely true' Church to fall into error. (I shall make no further comment on that point!)

You point to what was to be the very first crack in my own belief in Catholic doctrine when, as a boy of 8 or 9, we were told that an animal does not have a soul - and that, by extension, they could not go to Heaven. From that point on, as a lifelong animal-lover, I began to think whether I wanted to go to a Heaven where there were no animals - and now, 60 years later, it's still a crucial and absurdly negative doctrine for me to accept.

But going back to Papal Infallibility, although many in the R.C. Church would like to think that the Pope is incapable of error in ALL matters, they'd be forced to concede that he CAN be wrong if it's not one of the very few 'ex cathedra' pronouncements. So, if there were to be a change of heart from the top on gays, extremely unlikely though that is, they'd be able to make it without having to explain why they got it so wrong before. If it were to happen it certainly won't be in my lifetime, nor yours I think.

When I hear a word that comes from Pope Frankie Says Relax, I also go, "Pffffft."

I believe that I will be with all of my pets in heaven. It's my heaven and that's that. If a bunch of lace covered men in gold and red dresses that are straight, single, celibate yet live with other men want to believe that there are no pets in their heaven that fine, it's their heaven...not mine.