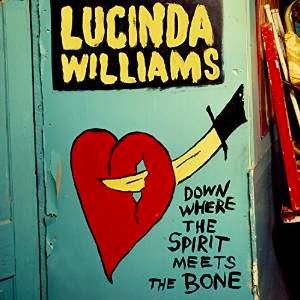 If I had to review the new Lucinda Williams disk, Down Where the Spirit Meets the Bone, in one word, it would be 'disappointing'.

Williams is a fearless songwriter and artist, but honestly, not everything she does works - and lately it is her vocals are what are not gelling for me.

Let me restate that: sometimes they don't work for me. Her voice has always been rough, and that has worked to her advantage for the songs she performs. But as she's gone album to album, the voice retains grit, but starts to lack enunciation...........when she chooses (it seems).

Williams falls into the usual double album trap - too many good songs for a single record, but not enough for two, so you're stuck with some sub-par tunes.

I will say this, had I reviewed this disk a month or two ago I would have panned it big time, but some of it has grown on me quite a bit. It's not not an Essence or Car Wheels, but it's ok. And luckily it's no Little Honey either (thankfully!).

And that's actually a problem. I want better than 'ok' from Lucinda.

There are some really good songs here. I really like "Burning Bridges", "Foolishness", "East Side of Town", "Walk On",  and "Protection".

Overall, the first album is stronger than the second. And it is in that second album that Williams is a little more loose with her ability to enunciate her lyrics. Now and again, I get it, but then it gets to the point of distraction. "Magnolia" is the perfect example of this.

Musicianship on Down Where the Spirit Meets the Bone is excellent. Hats off to those folks.

I'm glad I gave the album more chances. It's better than it was the first listen, but it most songs won't make it into a 'must play' scenario. There are some stellar cuts, but there are too many ones that I would hit 'skip'.
Posted by Blobby at 12:01 AM

It took me a while to get into this album also, but after it clicked with me, I really enjoy it. One More Day and Cold Day In Hell are also really good tracks. Have you revisited it lately?