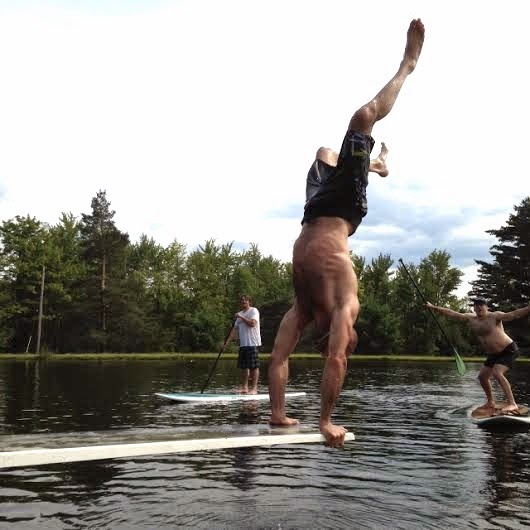 Oh Barry Gibb was so prophetic!!!!

Quite a while back I posted about a woman's obituary whose last name was Gaydar. Hehehe....Gaydar.

While I was making more fun of the name than the alleged perception meter some of us claim to have in determining if someone is of a certain sexual persuasion.  Most of the comments centered around if submitter had or did not have Gaydar - accurate or not.

In that post, I claimed to think I have good Gaydar.  I take it all back.

Let's start with my would-be future ex-husband, Scott (who you pervs have made one of the highest visited posts of 2014!).

I can't say my Gaydar was working correctly on this one. Or at all.

Truth be told, he wasn't even registering. It was just a 'wishful thinking' on my part. Honestly, I'm not sure I ever wanted him to be gay. Straight was actually preferred....not that it would have stopped me from having sex with him....but that's another story / wish.

So the official word is, Scott is not gay. He's dating. A woman. Apparently a real one. Oh well, I can still take his class. I can still look. Until there is a restraining order, there is no law against that.

Next up is Jon.

He was doing yoga with us at a few places, the last one being at MOCA almost two months or so ago. That post didn't say it, but while at that practice, I had a Nasty Pig t-shirt on. Nothing too offensive, I swear.  On the back it had two pigs humping and under that, it said "packed in its own juices".

Jon, not really knowing me, stopped me and asked if he could take a picture of that. Who am I to deny him? I have no idea what he did with the picture, but I can't say I haven't done something like that in the past to others.

But for all the yoga classes I've been in with him - and he has great form in his flow - nothing about him registered as remotely straight. Nothing.

Yet there he is, now, on FB, changing his profile picture with him and a woman. And a bunch of other pics of that same woman all over town with him in Chicago - where he's apparently been for a few weeks.

Now, maybe - just maybe - they're long time friends who had a meet-up, but I'm thinking not. And not that that Jon reads this (or knows it exists), but here's a word of advice: even with women, you can do sooooo much better.

The biggest blow - no pun intended?  - was Mike (the title image guy). He was referenced in my Rock Hall Yoga post. He was the one who responded positively to me deep-throating a watermelon-lime popsicle. Honestly, it wasn't a showing of my skills technique - I just didn't want it melting all over my hand. That's my story.

And with his trying too hard on his body and endless supply of tank tops, there is no way he was straight. None.  ....though the thick chain around his neck threw me.

We were on paddle boards (that's another post), each with their individual ones. Mike was overly friendly, as was "his girl" to me....well, to everyone. But let's stick with me, shall we? They were barely apart in the lake.

But like a school boy insistent that he doesn't like a girl by pushing her down or sticking her pigtails in the ink well, Mike kept purposefully running his board into mine so I would fall into the water. That just made me confused.

Later, Mike and the "girl" shared a board. She'd lie on it, with her head between his legs. Bitch!  Even later, I'd catch them coming out of the bathroom together. I don't think homos do that with their hags.

I told David maybe that Mike is just the last to know he is gay.

Yesterday, a friend was telling me about some guy he saw over the weekend, who was dating his niece, who was the most handsome man he's ever seen. And then he said, 'everyone under 30 looks gay to him'.

I couldn't agree or disagree. Clearly, I have no credibility in this matter.

and no, I don't visit the bathroom with MY boyfriends; that's just not correct.

My Gaydar works about half the time. Carlos, on the other hand, thinks everyone is gay.

I think all this reverse blood flow with doing yoga and your low body fat is causing the radar malfunction.

Spouse & I are like Carlos & Bob. Spouse thinks everyone is gay and I'm usually correct. I do find it much trickier with younger men these days. Straight guys in their 20s and 30s often border on metrosexual.

I have to side with AM on this one. The girls could be Beards. Out of three at least one of those girls is a Beard.

I have no problem admitting that I have zero gaydar. I've even been in a gay bar before and not known it was a gay bar...