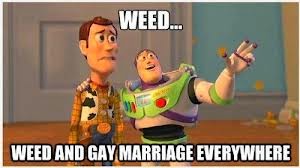 So another state ban on same-sex marriage falls. This time it is Colorado.

A little over a year ago, I wrote a post being somewhat critical of Colorado passing a Civil Union measure. I likened it to getting a hand-me-down.

And now, here they have gone and upgraded to getting the off the rack garment. Never used.

Good for them.  GREAT for them, in fact. Now Stevie B. can stop living in sin!

The current map of where states are in the process (or not) of obtaining same-sex marriage is confusing at best. There is the cut and dry of the 19 states that allow same-sex marriage.  There are the 13 amount of states that have overturned the ban but have a stay on actually allowing it until a Federal Appeals Court hears the case....and then possibly the U.S. Supreme Court (because, they're so reliable!)

Then you have the states who recognize same-sex marriages performed in other states - though I think all of those are under review by different and multiple Federal Appellate Courts.

Let's not forget the other states that don't recognize (or might) but are also trying - through the courts - to repeal the marriage bans, which will then lead to appeals in, yes, you guessed it, the Federal Appellate Court system.

Yet, let's say that the Courts allow same-sex marriage in the current states where there are stays. That would bring the number to 32 states.

While I do not mean to disparage anyone (ummm....Erik), but in what fucking world do we live in when it comes to being socially progressive, Ohio is behind Arkansas, Utah, Oklahoma, Idaho, Wyoming and Kansas???

There is that old joke about Oregon's whereabouts on the U.S. map: "it's just left of Idaho.....but what isn't?"

And they don't even believe in evolution in Kansas!!!!!!!

Ohio is even fighting the recognition of marriages performed in other states - that is, if you're doing guy-on-guy or girl-on-girl action. The thought of overturning the ban on same-sex marriage isn't even on the table (at least voter-wise) until 2016!!!

Now, the way the courts have been ruling, I would like to think that an Ohio judge will strike down the ban, assuming there is a lawsuit filed to do so.  (honestly, I have to believe there is one, but I don't know about it.)  And I have to believe that will happen before it ever gets to a 2016 ballot.

My cousin and I were discussing this other day and part was that we, as a state, were trying to appeal to the GOP for their convention. Possibly.

I will go more on the fact that the current Ohio governor wants to be on that presidential ticket (top of) in 2016. And what better way to do that than to pander to the far right on an issue that is so not an issue anymore.

Best case scenario: Ohio will bring-up the rear for the entire country who will have already adopted same-sex marriage. They'll do it not because they think it's the right thing, only because we are the only ones left.

We will be the University of Alabama in the same-sex marriage. Fighting it every fucking step of the way. Ok - maybe Alabama will be Alabama in this scenario, but Ohio will only be right ahead of them.

Ohio will be brought into this kicking and screaming every step of the way. We already are.

And I'm not naive enough to think these other states didn't have the kicking / screaming issue too. But at what point do you see the writing on the wall and make the concerted effort not to come in last?

I can almost overlook the fact that our marriage isn't recognized by the state, due to the fact that the U.S. government has taken some of that out of their hands. But I am so incredibly embarrassed to be part of the state of Ohio, you have no idea.

I don't really smoke pot, but man, Colorado has that and soon-to-be homo marriage.

I feel your pain --
Bob from South Carolina, where it's not the heat, it's the stupidity.

Apparently there is a lawsuit filed by six couples back I April to strike down Ohio's constitutional ban on same sex marriage. This whole process is so piecemeal though so I too can empathize with you on this subject. I wish that the powers that be would stand up and focus on real issues, not who one can and cannot have a committed adult relationship with. The time and the money spent on this is ridiculous.

Ohio is infamous for its politics, particularly around national elections. Please keep us posted to all the goings-on!

I still can't believe it happened here in Arkansas. In the South. Granted, a stay is on, and some dumbass could nullify what has happened, but still... Arkansas!