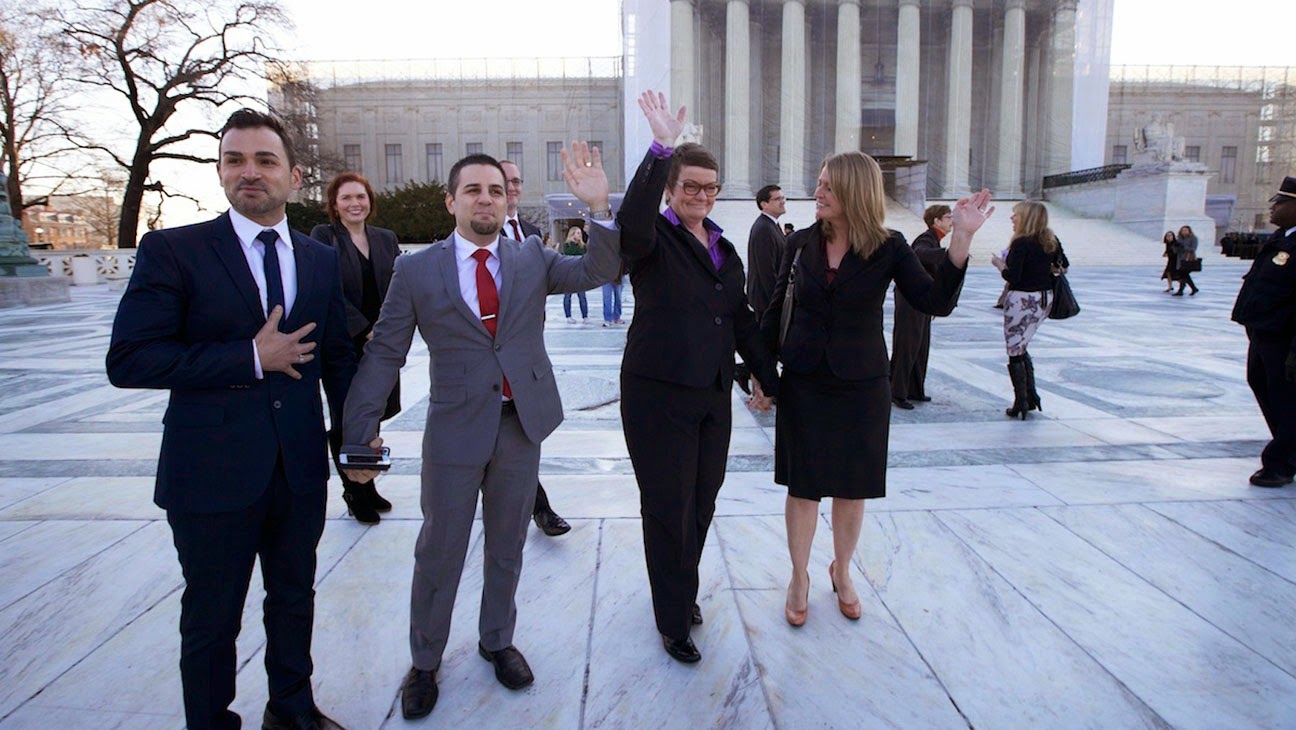 Weeks ago, we had a chance to see the Case Against 8 in our art theater.

Thinking we'd have time and not knowing it was headed to HBO, we didn't sprint to get there. As it turns out, it had one showing in the actual movie house.

Two weeks later it was screening on cable.

Overall, I am impressed with the film and taking the viewer from beginning of the case to the Supreme Court's decision on this case, as well as DOMA.

The filmmakers do a very good job, but I'm not going as far to say they did a great job.

As a procedural piece, they cover most, but not all of, the bases. Clearly they vetted the two plaintiff couples and said it was a painstaking process, but they skip most of how they got to them. I'm not sure who they weeded out and why.

I get the human aspect of it by doing a lot with the couples, but I would have liked to see more of Ted Olson and David Boies.

There were times I wanted more exposition on what Olson and Boies were doing - and again, why they were doing it. Some of it was dumbed down. And perhaps it was editing, but the comment Boies makes about if the U.S. Solicitor General agrees to present at the Supreme Court, he'd step back and not present. They never said if that happened or not. I only remember hearing audio of Olson presenting.

Logistically, I'm not sure how they were coordinated. Case in point: the actual SCOTUS decision. I had to log on to the website for weeks to see if they'd be ruling that day. Yet, Olson, Boies and both couples were seemingly on-site when the verdict was handed down. That's great, but were they in D.C. for weeks on end - just waiting to be filmed?

Most cases don't have the plaintiffs standing around on the steps awaiting a decision.

As the human aspect goes, I got little emotion out of it. A little more on the second viewing, but for the first, I just felt the filmmakers left us flat.

Perhaps it's my jaded view of life (no, it's true!), or that the verdict was known a full year before the film. Or perhaps that wasn't the real story they were telling, though they tried, I just think without tons of success.

That's not to say I didn't like seeing reactions.

I did get a kind of creep factor with the HRC's Chad Griffin attempting to be in every fucking shot. Though that wasn't as creepy as fame-whore Dustin Lance Black showing up whenever and wherever he could.

There is a scene near the end where Griffin and Black are in a car together and they find out that California can start marriages that day. Watch Black look deflated when he is usurped by Griffin after asking "I wonder if the guy's know" and Griffin replies, "I've already texted them". I know I'm backstorying it, but it seems someone pulled the proverbial rug out from under Black for wanting to be the messenger.

The film is a nice piece of history. A little sanitized. Clearly one-sided. They don't seem to interview any of the opposition - or if they tried, it is not mentioned.  Still the Case Against 8 is worth a viewing, if you have HBO.

I look at it this way: it beats watching the World Cup.