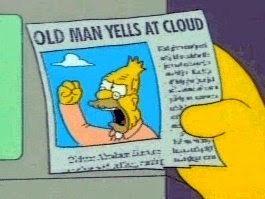 I have become the Old Man [citation needed] who yells at kids to get off his lawn.

Due to construction, the road is closed at the end of our street, which also just happens to be where our house is situated.

While barricades have been erected to keep traffic from going in or out, people just don't seem to care. Forget the fact that they have to pass another similar sign and barrels 700 feet sooner that they just soon ignore.

While walking Mr. Pete, in a way it's kind of fun to see the lemmings. One car goes one way, and the rest all follow.....assuming. Always assuming. Until they hit the dead-end (even after passing one of the signs and multiple barrels) and have to turn around.

It's even funnier when the lead car puts it in reverse but has a line behind them who are just sitting there, unsure of what to do. But inevitably, they back up. Some into a driveway (usually ours). Usually missing part of the actual drive and their wheel go onto our lawn.

Or there is the poorly executed three-point turn, which almost invariably gets at least two wheels onto the lawn, since they're nowhere near the actual drive.

And then there are the kids who go down into the ravine to get high. These are teens arriving in the brand new Audi Q7s or their Lexus,  or my favourite, the $115,000(+) G class SUV. Kids. With a car worth over 100 grand. All of them adorned with their private high school stickers.

Those poor tots are forced to go into the mosquito-infested woods to get high. Isn't that why they have their servant quarters and country houses?

But since they're so entitled anyways, they have no qualms about dumping their trash on our lawn or backing over it.

I snapped the license plate of one of them as five kids sat in it waiting for me to disappear. As if.

The lone guy got out and asked why I was taking a picture of their car. My response is, "you know why - so you tell me". They left in a teen huff. As much as one can do in an expensive piece of German machinery that mums and dads gave them.

During the school year, it's easy to predict their traffic. Right after school till right before they have to be home for dinner or homework. During summer, all bets are off. It starts at 11:00 and goes until at least 23:00. Dozens of cars per day. The police do nothing.

And let me tell you, it's a little disconcerting to watch a 13-14 year old girl go down deep into those woods with 2 or 3 19-20 year old guys. But if she has to have a train pulled on her to get her fix, that's her life.

The kids speed out of here, going the wrong way on a one way street, or peel out going 50 in a 25 where kids play and old men [citation needed] walk their dog.

Honestly, I am praying one of them gets t-boned by an on-coming car, if not a full-on head-on collision. I hate to say it, but it won't matter that much if a kid who is high is injured or dies - it's got to be the innocent person in the other auto before the law takes notice.

But the actual yelling part, to which I referred in the beginning was a Davey Landscaping truck, trying to go around the barriers.....while I sat in my front lawn....watching......waiting.

Actually, I was cutting my lawn. There was no way they couldn't see me. There was also no way to get through. Well, I mean, even if they drove on the lawn around the barriers, there were a good 6-7 huge construction vehicles working at that moment. They'd have had nowhere to go. Still, they made weak attempts.

Oh, and it wasn't just a truck but a multi-wheeled trailer with all their gear. So when they decided to back-up - which is tricky in its own right - I stood and watched them roll over the tree lawn with their truck and trailer.....and even though they saw me, continued to keep going.

I killed the mower. I yelled again and stormed walked toward the street.

That is when they stopped. I mean, I could walk faster than they could back-up, not only with the trailer, but the soon to be other set of signs they'd have to maneuver around.

They apologized profusely. Like I cared. But I also told them since they were a lawn care company, they could fix the damage they just did.

And they did. I will at least give them that. Kind of. When I went back out I noticed a big chunk they didn't touch. So I left a message with the company. 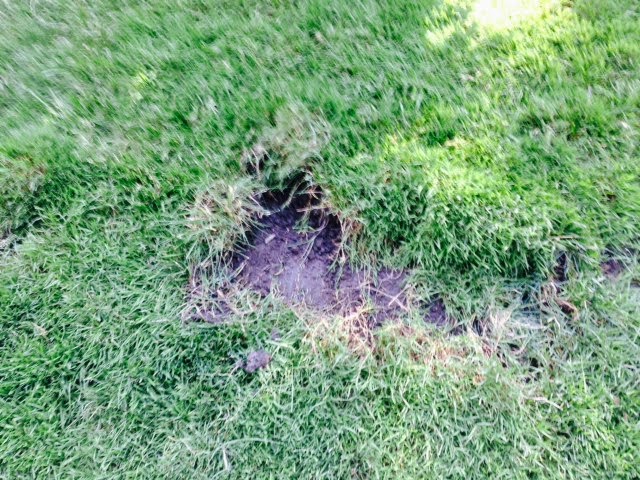 Of course, had no one seen, they'd have kept going, of this I am almost assured.

I have had it with reseeding that part of the lawn 3-4 times per year due to assholes like this. Boulders are our next step. Small enough to fit, but big enough to damage their fucking cars. They can explain that to mommy and daddy how they have a $2700 repair bill.

And while some (especially Jeremy but also Geoffrey, David) have labeled me an alter cocker - I'm going on record to say, until my father passes on, that title does not pass to me.

I think boulders are an excellent idea. F*ck 'em if they can't take a joke.

to do the (old man) thing properly, you need a cane.

my neighbors across my street did the stones at the corner;some drunk did serious damage to his car about 2 months ago.

as for the drugged up kids, call the cops on them.

You can't be a frankly old man when your reason (s) are justified. It has to be unreasonable and your reasons are very reasonable - can wait for the boulders to begin rolling.

I am honoured to be in the league of Alter Cocker pronouncers....and you know I wish the best to your father. We can bend the rules slightly and simply call you AC until you are right and properly an Alter Cocker.

I am with you on the boulders. Do it now...then post pics of the auto damage.

Skip boulders and have 12' long I-beams pounded into the ground, Normandy fashion.