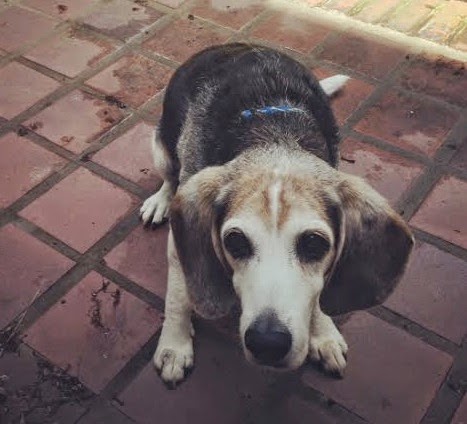 We've made a concerted effort over the last two years to make and keep Petey "grain-free".

While it is not the only reason for his allergies, his ear infections and his biting the tail, the vet certainly thought it would be a good thing to keep away from grains.

So we have. And we have mostly succeeded.

There was an unknown set back when I got 5lbs of free biscuits from PetPeople. The lady showed me which of their stock was grain-free. I found out later that none of them in their bulk biscuits are grain-free.

Of course, I found this out after he ate 5lbs of them over a number of months. Hopefully it was so little at a time over such a long period that it didn't effect him.

So last weekend, 710 told me that Petey got into the trash. He rarely does that. But that night he was panting like a maniac, enough that we considered taking him to the all night vet. We attributed it to the high heat.

The next morning I wondered how he got into the trashcan, since the lid wasn't full enough for him to gain entrance. When I returned from yoga, 710 asked me what I did with the hot dog buns I purchased when I grilled brats. I said I left them on the counter. They were nowhere to be seen.

As it turns out, Petey did not get into the trash. The "garbage" 710 found was the wrapper to the buns, of which Mr. Pete at all 8. We're are assuming they were consumed in 41 seconds.

I'm not sure if it was the volume of food (oh, he also ate a bowl of cat fud too - also full of grain) or the grain itself that made him not feel well for a good 24 hours.

Still, he's a hound and food driven. We can protect him only so much. New measures have been put into place to make sure food is farther back on the counter, but he's a cunning little pup....I won't put anything past him.

Luckily our dog is the size of a shoebox, so him eating anything off a counter would require a ladder of some sort.

There is nothing so wonderful as owning a pup, is there?