Honey for the Bees 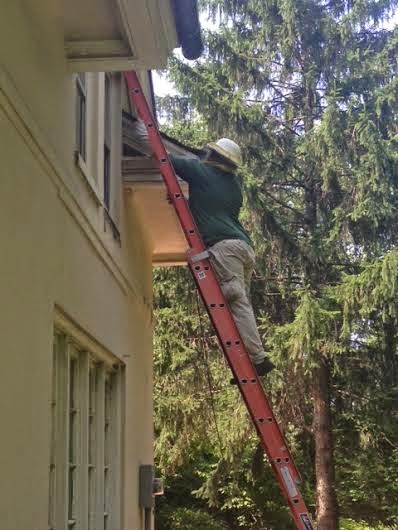 Outside my office window, I've seen the comings and goings of bees. Lots and lots of bees.

Yellow jackets, to be specific. Or predatory wasps, as they are known.

They have - well had - a nest in the garage roof, in the eaves. Ick.

While counting to 60 (it seemed like a reasonable amount of time), 16 bees went in and seven came out. That seemed like a heavy traffic area, if you axe me.

The house is 104 years old - I didn't need a bunch of bees expediting the need for a new roof, so I called a pest control guy.

Before you get all up in arms, these are not honey bees. I know there is a massive shortage of those critters doing the pollen / stamen dance. These are not those kind of bees. Honestly, I don't know what yellow jackets do, except sting the hell out of me - so for a lousy $65, a guy came and took care of them. He estimated 200+ in the hive.

He was telling me that 'most men' would just have caulked up the opening and why 'most men' shouldn't do that. Besides for the fact that I'm sure I'd get stung 200+ times, he said that the caulk wouldn't stay put and if it did the bees would eat through it.

He also said not to seal it for 3-4 weeks. Let the hive dry out. If I didn't, the larva would ferment (or something) in there and the smell would be incredibly bad.

All I know is that 710's 'wife' doesn't like the bees or the would-be rotting smell outside my office and that I signed the check for him to come back in a week (with 90 day follow-up) to get rid of the little buggers.

A 'wife's' work is never done.

Song by: Alison Moyet
Posted by Blobby at 12:01 AM

WHY do people always assume man and woman? get with the times, people!

I have those same little critters..in my office at work! I've called the management company twice now and all they've done is come and suck up the dead ones on my window sill. I called again yesterday and made vague threats about my staff being allergic...lawsuits.etc. Let's see what happens.

♫♪Sometimes it's hard to be a woman♪♫
When people ask me how my wife might feel about something, I always say, "I'll ask him."

LOL - he thought you had a wife.

I ran over a nest of yellow jackets with a lawn mower once. I never knew I could run so fast, scream so loud, jump so high and get my shorts of so fast in midair. The neighbors had a good time watching!

You should wear your French Maid's outfit the next appointment. :)