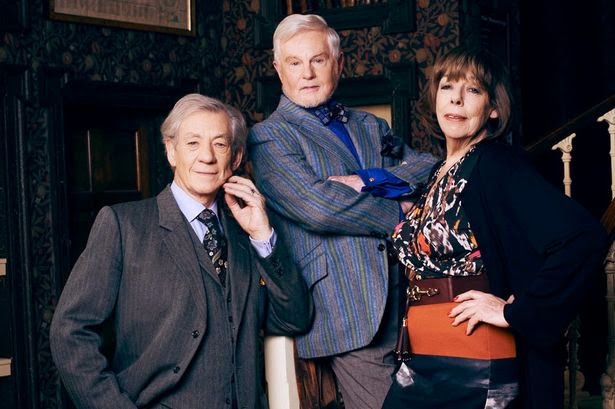 You know, I wanted to like Vicious - the PBS series starring Gandalf the Gay.

It's only seven episodes per season, but the show title lives up to the tone.

Vicious is like an older, British version Fabulous Beekman Boys, though as a scripted "comedy" instead of a "reality" show.

If you haven't seen that show, it's about two princesses who move to upstate New York and based on their exchanges, seemingly cannot stand one another - possibly due to clever editing, or possibly just due to them being stuck in a bad relationship.

Both shows are somewhat painful to watch.

I kind of expect more out of a knighted Ian McKellen.

When I type that out, those last three could be straight from Golden Girls.

But it is the two leads (McKellen and Derek Jacobi) who are just vile to each other - all in the name of comedy, though for the first four shows I barely smiled, let alone laughed.

In show five, there was a brief - 15 seconds?  - of emotion that wasn't veiled contempt.

But it was show six where they (kind of) stood up for each other. Also in that show was the decline of Ash, their 22 year old straight affable neighbor boy, who inexplicably hangs out with men in their 70s. While he seems young and unworldly, this last show sees him turning into them - with the way he exchanges nasty barbs with his girlfriend.

And that was kind of sadder.

I'm sorry that Frances de la Tour (History Boys, Harry Potter, Hugo) gets played off as the sex-crazed hag of these two bitter queens. She's so much better than this.

Actually, they're all much better than this.

I've never watched an entire episode though have seen bits and pieces when flicking channels (though I suppose there's almost an element of curiosity to nudge myself into having a peek).
Sir Ian has said that although the two leads are indeed outrageously bitter to each other, today's audiences, being more mature and wised-up than previous generations, will see it as it is, as inoffensive and harmless fun.
I'm not so sure. From what I gather about it, it consolidates prejudices on what 'such people' are really like - and people do so love to have their prejudices 'validated'.

After the first episode aired, I vowed that I wouldn't watch this series. So, why am I returning each week?

Nobody can do comedy like the British can. And each week, Ian and Derek deliver a couple of good zingers.

Ash clearly enjoys their company and, yes, it is disappointing that he is turning into them.

I agree with your comment about Frances. What influenced her to accept this role after her Tony Award winning role in "The History Boys"?

I like Mr. J a lot ; I am disappointed to hear this is not worthing seeing.