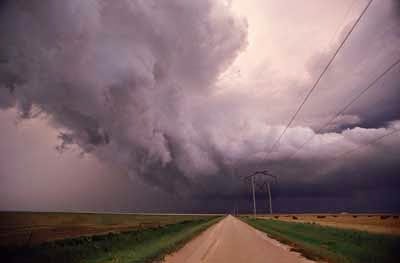 While waiting for the Muses to return from their unscheduled PTO, I'll just ramble about thunderstorms.

Being in the mid-west (is Ohio really mid-'west'? je think not.), we are prone to the occasional t-storm. For the most part, I love thunderstorms.

There have been one or two that have scared the bejebus out of me - one being when driving from Columbus to Dallas where lightening was practically hitting the hood of my car. Morty, ever the alert co-pilot, slept through the entire thing.

We have also gotten a few house-rattlers. You know, when lightening is so close that the house just shakes when it strikes and you wonder what tree branch might be crashing down....and where. While intense, those can also be neat, as long as one has proper shelter.

Usually though, it is the rolling storm that comes. You can hear it approach, if not feel it, well before it actually arrives.

That got me thinking yesterday morning, around 04:30, as I was in bed and heard the thunder come near and could see some lightening through my still closed lids. I've done this hundreds of times, which is why I started thinking - it is kind of amazing that many of these storms come right before dawn. Right before I might head to the gym or into the shower or inexplicably, on trash day, when I have to trek out to the end of the drive once or twice carrying our refuse.

Don't get me wrong, we certainly get some storms at nigh or in the afternoon, but - and I don't have any data to support this - I would say the majority of these cels hit us right as we need to start our day.

The dog is smart enough to know what rain even sounds like, so unless he really has to go, he's staying on his bed and probably snoring. We are very happy to have a dog who is not afraid of the sound of thunder or fireworks.

A strong storm might stop me from a morning gym visit (because I'm probably looking for any excuse), but it won't usually stop my from my shower. Yes, I remember what my mother told me about not taking one while there is an electrical storm. 50 years later, I'm still here to talk about it. With the advent of cell phones, the old adage about being on the phone during one no longer really apply.

Maybe conditions are more favourable to thunderstorms in the early a.m., I don't know.

I've always felt bad for family and friends (well....maybe just friends) who move west and experience fewer thunderstorms. I hear from people, mostly in San Francisco, that they miss their absence. Some have missed things like that enough to move back east, though I think it's probably just that the city is cost prohibitive when it comes to housing.

Still, I lay in bed, listening to the thunder, seeing flashes of light......and then eventually rain on the roof.

we had one hit at 8p yesterday. cooled things right down.

When we were living in Miami, and Katrina came through and tore the roof off, and took the fence away, Carlos was asleep.

In DC they tend to hit between 4-6 in the afternoon - just in time for rush hour. Here in Long Island, NY it's usually early evening with just after midnight a close second.