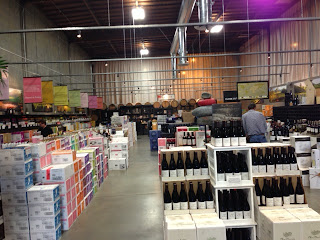 Sometimes my job does have perks - at least in ways.

One of my clients is a major player in wine and its distribution. As a vendor, I have access to their wine store.

I haven't really taken advantage of this perk, mostly due to time. While they do sell wine, they don't ship it, mainly because the store is open to employees, who just take it home with them.

So yesterday, I got a box and selected a number of different wines ranging from $4.25 to $13.00 per bottle. There were some there that were $48 per bottle, so I don't know what that runs in a store. More than I would ever pay.

I selected some Pinots - both Gris and Noirs. Some Blends. Some Cabs and according to the store guy, an incredible discontinued Chardonnay that retails for $75 per bottle that I snagged for $10.  Oh and a dark red infused with dark chocolate.  Only one bottle of that since I have no idea what that will end up tasting like.

However, I wasn't counting on one major thing: FedEx and UPS won't ship wine....or any liquid, I think.  They will if it goes from company to purchaser, but not from individual to individual.

Mind you, by this time, I had already purchased the wine and left the premises before being made aware of this little speed bump in life.

So, I'm taking a risk. I got bubble wrap and encased not only each bottle, but the bottom and sides of the box from the winery. I also got a FedEx box to put the original box into and then packed and sealed that.

Thanks to Mr. Platinum Status, come this morning, I can check this as a bag at no cost and hope the baggage folk don't ruin everything.or that we hit horrible turbulence.

As much as this is a perk of the job, I don't envision myself doing this again.  Way too much work even though I saved a fortune.

FedEx was so less than helpful.  They almost didn't even want to sell me a box and packing material. They certainly would not help me assemble the box or expertly pack it, even if they didn't ship it. Somehow to help a poor schlub like me would make them liable if something happened.  As if.

Well, hopefully, the wine will make it back in one piece. Or twelve single pieces.   Wish me luck.

what a deal! but OMB, you are entrusting THAT to an airline? can't wait to see how this turns out (she said hopefully but cautiously).

When I was in grad school, my friends from germany would bring empty suitcases (well they were packed with tp paper to keep them from collapsing) so they could fill them with things they bought here which were much better and cheaper (this was in 1990). Couldn't you do the same thing? Bring an extra suitcase just to fill with wine, already packed with bubble wrap. It could be one of the hard shelled type suit cases.

i,ve had this problem as well - I go somewhere and they can't ship wine. Stirges.

Oh. So you're one of THOSE people.

You could have just told FedEx/UPS that you were shipping olive oil in glass bottles....

Of course, I think it's a misdemeanor. If you get caught. On your second getting caughtness. Or so I hear. From a source.