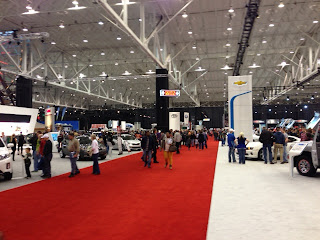 That's what I have left on my lease for my car.  It was probably stupid of me to do a lease, but that's what I did.

The car I have is nice, and fast, but it feels too grown-up for me, like I should be driving 3.2 kids around in it.

I'm not 100% ruling out buying the car after the lease ends, we'll have to see what the deal is.

Yesterday, we went to the Cleveland Auto Show.

I forget that it really this "show" isn't horribly conducive to looking at automobiles. The number of snot-nosed brats who sit in the cars and pretend to drive them so their parents don't have to watch over them is annoying.  Ditto with the lady who wouldn't leave the car, or let her husband leave, so she could email - for TEN MINUTES!   Really??

I am not sure exactly what I'm looking for.  The Kia Optima looked nice - and reasonably priced.  Ditto with a few VWs too.  Kia also has a new car coming out in 3-4 months which looked very cool - but it was on a turnstyle and you couldn't get near it.  It's priced a little high, but we'll see once it is in a showroom.

I don't understand the Kia marketing strategy of rodents in hoodies to sell cars.  Who is the fucking demographic for this idea? 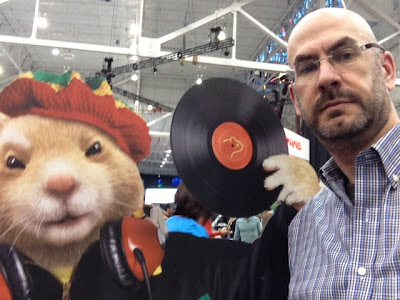 So 710 and our friends just made the rounds at the auto show and left with no new car - not that we were planning to - though I did win a leather coin purse.  whoo-hoooooo.  Thank you Toyota!

Oh, and I got my picture taken with a picture of Superman.   ....or a cut-out replica of Superman. 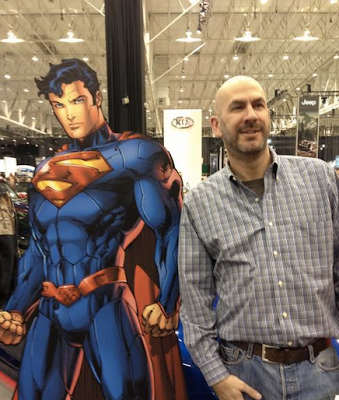 Our friend, Sal, asked 710 if he wanted his picture with Superman too - he declined.  I immediately chimed in:  "he doesn't need a picture, he already sleeps with Superman every night!"

"he doesn't need a picture, he already sleeps with Superman every night!"

BWHAHAHAHAHA! if you say so, dear! ;-b

Finally, someone else who is puzzled by the hamsters. Why would this make me want to buy a car? Guess I'm not in that demographic either. Hey, Superman, where's the pic of your prize?

Whatever happened to that old station wagon you used to drive?

Kia is Hyundai's entry/young person's brand but it isn't doing well and may not be around much longer - at least that's what I read. Also, the quality is not as good as Hyundai's. Scion, by Toyota is in the same position.

Why is Superman on the show? He doesn't need a car anyway?

KIA totally missed the demo target with the Soul.. The target demographic seems to be 20 somethings, but, it seems to me that everyone I see driving one is older than that. (Myself included... I'm 48 and have been driving a Soul for 3 years...)

The Optima is a great car. If the new model had been available 3 years ago, I'd be driving one (instead of my Soul)

As far as KIA not being around much longer, I don't think that's a danger. KIA's US sales have increased every year for the last 18 years, and they sold over 500K cars here in 2012. (Including 100K Souls.)

The quality of the cars has vastly improved over the last few years. ( Personally, I've experienced few problems with my Soul over the last 3 years than I did with my old Ford Focus over the same time period)