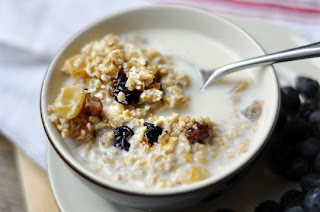 Yesterday we were guests at another neighborhood "men's breakfast".  All men. No girls.

It's like a real life version of the He Man Woman Hater's Club.

I wrote about our first one last year.  And actually we were participants in one only three weeks ago.

Normally (I think), one gets invited to this event annually. We're not sure how many there are per year, but we do know they are a rotating invite list of the men in the 'hood.

We thought our one time was last month.  But alas, we got a re-invite.

To be fair, I know we were asked again because for this one, our old neighbor returned to participate.  Marty, if you remember, lost his partner just short of a year ago and then moved about a half year ago. While I've spoken with Marty often, I had not seen him.

Save three or four guests, the rest of us were queer.

Like last time, our host put cranberries and blueberries in the steel cut oatmeal. He said it made it a little tart and a little sweet.  I turned to my neighbor Tom and said, "just like me!".   710 overheard from across the room and I saw him roll his eyes.

At least this time, nuts and dates and such were not put into the mix. You could after the fact if you wanted, but it was not done for you.

As with all times buttermilk and Marmite were on the table, though I never saw anyone use these. I'm sure the host did, but still I didn't see this act.

Last time, the host had something called 'gentleman's spread'.

I suppose it would be a good name for a strip club, but in fact it is some kind of worse-than-Marmite spread made out of anchovies.  ...and you put it on toast!  G-ross.

Both times the conversation was nice and the food fair (at best). I'm still not a fan of oatmeal, but if you have enough fruit in it, and enough brown sugar on top, I can choke it down.

We did steer away from too much conversation with Marty.  Sure he was included, but I know he was not comfortable talking too much about the last 10 months - and I totally got and respected that.  Still it was so good to see him.

Yet, two servings of oatmeal in three weeks was as much as I could stand. I'm confident we won't be on the list until next Winter.  And I'm ok with that.

You classy A listers....

That gentlemen's spread looks really interesting. I'm getting to the point where the stinkiest fish and the stinkiest cheese are more and more appealing to me.

Anchovies? Were they attracting lesbians? ;-)