What Do You Hear in These Sounds 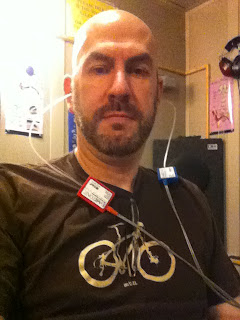 I'm not supposed to bring drama to the table blog, so I've been told. But if I just gave you the boring details, who would stick around for this web-log diary?

Yesterday was my big day at Otolaryngology - and yes, it's true, I met Rebecca when she was working there at THE Ohio State University Medical Center - way back in 1988 (?).  So she can spell it - or at least say it.

When it comes to health my history goes like this: I go in for appendicitis and get diagnosed with bone cancer. I get one hernia fixed only to find out I have a second....and so on....and so on...

So going in for a hearing test one could only assume the worst, right?  Right!

Well, first off, the Resident was key-uuuuute. We went through my medical history and the recent events of the hearing loss to current day. Then he asked, "what else can you tell me about yourself....?".  I couldn't resist - ".....well, I'm a Leo and I like long walks on the beach...."    At least he laughed.

He told me a few scary things - like out of those who have spontaneous hearing loss, only about 40% of them ever recover the sense. So my earlier assumption of not being worried because it wasn't gradual was way off base.

He also said sometimes they order a scan of the brain "to make sure there is nothing going on up there."  I jokingly replied, "would you care to rephrase that?"  He said, "you know what I mean!".    Oh, Doctor / Patient flirting!

Then he used these devices on me.... 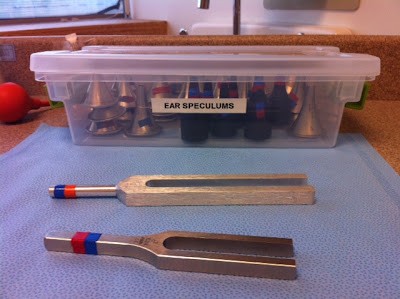 Actually, it was interesting using the forks and placing them at the ears and on the bone behind the ear - as apparently some people hear better / more through the bone as opposed through the canal. Ya learn something new everyday, eh?

After that it was off to a series of hearing tests. Quite a few of them - some I participated in listening and either pressing buttons or repeating words and phrases at different sound levels. Some I just had to sit there while they tested wave patterns of my ear drums. A lot of beeps, yes indeed.  A few really really loud noises too, now and again.

Then with those test results - mostly normal, with some loss specifically in the left/affected ear -  it was back to see the actual Attending physician. She was nice, but scared me a bit.

Clearly, spontaneous hearing loss is not common and she made it clear that if it were to happen again, to call her directly and immediately - and gave me her personal contact info, and that I couldn't wait a few days to get in to be seen.  Yikes.  ...she even said if I were traveling she'd get me to the nearest center as soon as possible.  Double yikes!

We opted not to treat with steroids at this time. She does want to do an MRI on my brain - which I suppose where the "blog drama" comes in.

In reality, I'm sure there is no tumor, but until she mentioned it, the thought never crossed my mind.  Of course with my medical luck, I"m probably already in Stage IV of whatever I'll end up being diagnosed with.

Nahhh....I really don't believe it is anything. But I suppose I'll splurge the 20% I have to pay for that fucking MRI, which will an ung-dly amount of money. When it was my leg and they were unsure what it was, somehow I knew - or talked myself into worse case scenario (and was right), this time I do not have that feeling at all.

Oh, and I also got some over the counter meds to hopefully control the ringing in my ears. But I suppose if it is a brain tumor, who really gives a shit about the constant high pitched noise in my head?

Song by:  Dar Williams
Posted by Blobby at 6:46 AM

Birdie said...
This comment has been removed by the author.
7:44 AM EDT

How many guys will know how funny the stirrup line is?

I had no idea there's medication for tinnitus. I'll check it out.

I know there are no words that can take away that nagging fear, so know that we stand with you as you await the news.

I looked up the symptoms for syphilis and sudden hearing loss is not one of them. Clearly, the medical books will now have to be re-written. Well done, Blobby.

P.S. My inane jokes don't mean I'm not thinking about you. I'm keeping my fingers crossed. Maybe this is a result of listening to music too loudly many, many decades ago before you turned old and frail.

You'll be right mate. Just give it some time to pass, just like those farts that you can't hear right now

You still have your sarcastic whit.

Sorry about the uncertain news - it's the not knowing that can be worse.

Interesting.
One's medical history reads like a novel.
Cleveland is tops for healthcare. So I am optomistic for your condition.

fingers crossed here for you.

Are you a worst-case scenario person by nature? Just curious....