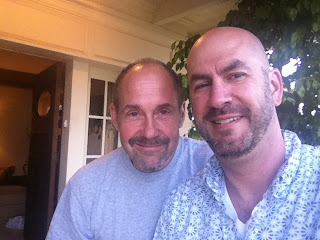 When I was in the Los Angeles area this last trip, I drove up a bit to see a longtime friend, York.

I know I've mentioned in one post having friends named York, Hillel, Hunter and of course, Denton. There is a Joe and Tom thrown in there too, I suppose.

I think I've mentioned him a few times before, but even with all the other trips I do to California, I have not gotten an opportunity to see him.

Morty and I met York 20 years ago this month !!!!  Can you believe that, Mort?  We were on a lost week(end) that ended in New Orleans.

I've remained friends with York ever since..

He's just one of those people I clicked with - and months, or longer, can go by and we pick up with no sense of weirdness. Not bad considering we've only actually seen each other in person a little more than a half dozen times in these two decades.

When we met, I was very smitten with him. That turned to friendship and has endured. When catching up with him for the six hours we sat around his house, I could see glimpses of why I was smitten.  Being older and arguably wiser, looking back, I can't imagine that would have ever come to fruition.

Ahhhh youth.  Though 28 doesn't seem that young. Well, I would have been 28 at the time, him a bit older.

This pic makes him look old too. He represents much better in real life than in the three pictures I took. I look slightly different in each one - he looks exactly the same frame by frame.

Still, it was good to catch-up. His partner, Stuart, was there when I arrived, and it was nice to see him again as well.  I was supposed to have drinks with the aforementioned Hillel, but my "lunch" with York went on that six hours - and I still had to drive an hour back to my hotel....so Hillel will have to wait until the next trip. He understood though.

Just for shits and giggles - not so much the giggles part - here is York and myself back in 1994 (?) in LAX. I was flying through and he came to meet me between lay-overs. Pre-9/11 when one could still to meet people at the gate. 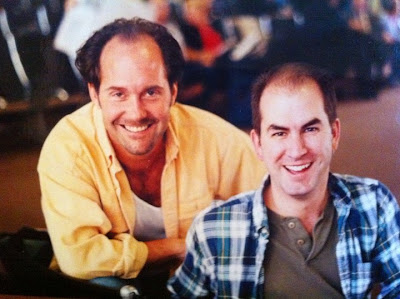 
Song by: Matthew Sweet
Posted by Blobby at 7:58 AM

That lost week(end) needs to be made into a movie. Lindsay Lohan would probably have to play me.

All good weekends end in NOLA. ;-)

what a lovely story.
I love the name "York"
and you two look even better now than then.