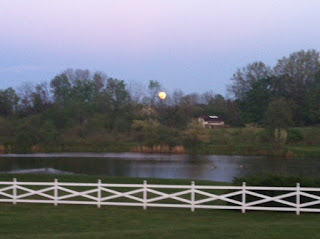 Last night at 23:34 was the rising of the so-called Super Moon.

CNN says that the perigee moon is an "annual phenomenon occurs once per year".  ....which I suppose would be annually.

I captured the title image while at my sister's house as the moon began to rise above the horizon.  It was so much more impressive than the iPhone shot.  To be fair, the moon was 221,000 miles away.  No telephoto or zoom is really going to get me that much closer or clearer of a shot.

Then I waited around till well after Blobby's bedtime to take a snap of Luna at just the exact time the astronomers said was the peak:  23:34. 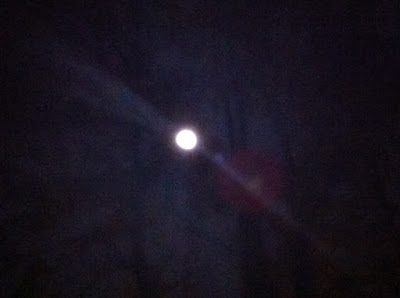 I may as well have taken it with a Kodak Instamatic.

The view I had was great - right in between tall trees, which you can almost make out, it looked very artsy, but alas, it did not translate from eye to camera lens.

While the moon was indeed incredibly bright, it looked bigger and closer at 20:00 than it did at this time. However, I feel like I just wasted a huge opportunity after I closed the door, set the alarm and slipped into bed.

I went out to take a picture of the moon, but I hadn't seen the moon.  I was so wrapped up in getting the image, I didn't take the actual time to look at it's beauty and seeing details of the craters they said you could see.

I was out in the cold (seriously, it was almost 90 degrees a day before and now it was in the low 50s) and missed the actual show while still out there "seeing" it.

I suppose I'll have to wait another year and then skip the blog post on the event and just view it for myself.

It's a better view than I got. Although it sounds like the best view was of you taking the pic. As for the cameras, the better wouldn't get you closer but might take a sharper, more detailed pic.

It was beautiful in Boston too. Nearly 90 the other day? I'm so jealous!

Or you could have just looked at all the incredible pictures people took and posted on the Interwebs....