If This is Goodbye 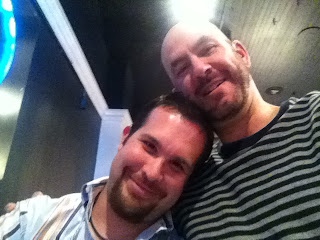 I mean, I'm not losing Jeremy as a friend, but he is leaving town. Presumably. Probably. Allegedly.

He hasn't been in Cleveburgh that long and probably won't be much longer. It wasn't the fit for him. I get that.

Jeremy came from Phoenix via Kansas, via Baltimore via White Plains. Most likely he is off to California.

He couldn't find his place in this town. That kind of surprises me as he his such a schmoozer. But he found that being single and gay in Cleveland left him at a disadvantage of making good friends. I probably should have helped more, but I didn't.

He and I would do things - breakfast, lunch or dinner, but 710 and I are lame as a couple in terms of hosting events. I didn't feel really right inviting Jeremy to other people's parties - so I'm bad on that front. The other thing is: he is so young!  32!

He likes to make fun of the fact that he was born two years before I graduated high school.  Prick.

Actually, I only pretend to let it get my goat.

Still Jeremy is wicked funny - abrasively so. That is ok for me, but I could see where it might rub others the wrong way. Hell, I've lived that way, so of course I can see it.

Last night, he and I went out to dinner at a new-ish place in town: Nova.

It kind of worried me that it's URL was a wordpress site. They didn't even have the $35 to buy their own domain name?  I'm not holding out for it being there long.

If Jeremy leaves, he'll probably head to Southern California. This bodes well for me, as I have clients there, so I can still see him 4-6 times a year. If he hits Northern California, email and phone will be the probable. Yeah, I might get there now and again, but not often.

I think he'd fit in better in the Bay area than the OC, but he likes the job better in the latter - and the cost of living is somewhat better there too.

He'll know in the next few weeks. If it goes his way, it will be a few weeks after that before he's gone. I guess I'll have to plan a few more dinners with him before that happens.

It won't be at Nova.

Song by:  Mark Knopfler & Emmylou Harris
Posted by Blobby at 6:26 AM

that is sad news. I hate to see friends go, for it is so challenging to keep the ties.

sorry that you are losing a friend