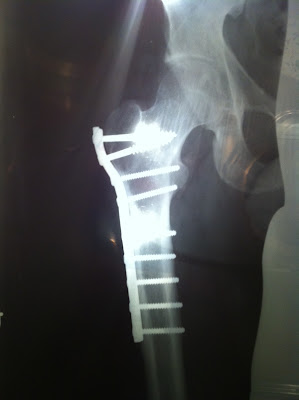 Monday (what? I couldn't miss My Music Monday, could I?) would have been 19 years since I became cancer free.

I'd like to say my baldness was the result of chemo or radiation, but it is really just hereditary. I didn't even have chemo or radiation for my cancer. The thought, at the time, was if they couldn't successfully cut it out, there wasn't much else they could do for me.

On March 5, 1993, my doc put me under to cut out part of my right femur, oh and the malignant tumor.  The plan was to take the tumor out of there, use some bone from my hip to replace it and send me on my way.

Ok - that might be a bit too simplistic of an explanation, but the result ended up being the doc needing to take much more femur than expected for the hip solution to work. Instead, I have cadaver bone in me.

Spoooooooky.  No wonder my apartment at the time was haunted.

What you see is my actual post-op xray.  I have no light box in our house, because 710 doesn't want to display this like art - like I do - so I just held it up in the bathroom and took the pic.

The radiology technician put a lead sack on my sac, you know, to keep me from being damaged - like I was going to have kids in the first place! To be fair, how would she have known?  Anyway, if you enlarge the pic you might be able to see that, welllllllll, she didn't cover everything.  It's not like they ever made a lead bag that big to cover Blobby Jr.  Something was bound to spill over the side. ....and it does.

And yes, that plate and those nine screws are still firmly in place, though if you want to get grossed out, you can feel some of the upper screws when I walk. 710 does not like that at all.

For some reason, now and again, the leg vibrates. It's not painful, it just buzzes like once every 10 seconds.  Sometimes it just goes on for minutes, sometimes for hours.  And don't discount the fact that most times I can predict the low-front that is 12-36 hours out.  It might not always rain or snow, but the low front? it's a-comin'.

Now and again I get checked-up, but it's safe to say that I remain cancer-free.

I've written about this since the beginning of this blog and it is even beginning to bore me. I just came across the xray and it coincided with my surgery date.


Song by: Paul Hardcastle
Posted by Blobby at 7:08 AM

Email ThisBlogThis!Share to TwitterShare to FacebookShare to Pinterest
Labels: Cancer, Health, Me

Does all that steel in you mean that every time you fly they all the alarms to off and they give you special attention?

congrats! 23 years free coming up on 6/21 for me. like you, no chemo or radiation, just a test every year; I take that next week.

I have no plates or screws (heh heh heh) in my body, just some missing pieces that I never wanted anyway.

we survivors are strong, we are invincible!

and uh I kinda agree with 710 about the light box.

You ARE NOT an animal. You ARE a cyborg.

In keeping with Sean's comment, "You have been assimilated."

Glad to read you are still cancer-free.

I think it's fascinating what medical technology can do. How do you mean vibrate, by the way? Is it like you have a cell phone, or is it like a prolonged twitch?

Damn my morning eyes! My earlier comment is practically indecipherable.

You should TOTALLY get a lightbox. I have two of them. But I use them for work.

what a splendid story; thank you for sharing it.
E-mail me about the light box ; most people don't use it properly.