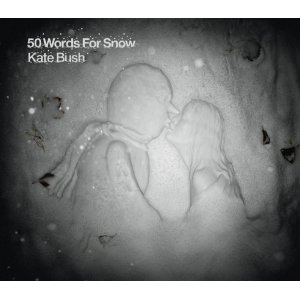 I'm just getting this off my plate early this month, so I don't have to think about it again. The post or the album.

Normally, I'd say I am a Kate Bush fan, but after some consideration this might be past tense. Was.

While I got through her last original release, Aerial, I thought to myself, "I had to get through it?" That didn't seem right.   Bush is one of those artists whose albums I look forward to, not only because of the usual artistry that come with them, but because of their infrequency.  ...and there within lies some of the problem.

One waits so long for a disk from Bush that you purchase it without sampling it (which, back in the day, you could not really do) and then you get stuck with the legend of Kate Bush and not necessarily where or how she have evolved.  I have no one but myself to blame for this.  Her current style may no longer be mine, or to my liking and there is nothing wrong with that.

Where Aerial had some shining moments, I'm not finding these in her new release 50 Words for Snow.  If snow is cold, distant and monochromatic, then Bush nails it with this "concept" album.

Seven tracks at over 65 minutes (the shortest track almost 7 minutes, the longest being over 13) and of course, I want to like it more than I do - which isn't much.

I will offend many of those 5-star ratings folks who will bless her every move no matter the circumstances, but it is Windham Hill music with a slight edge - and that's only really the vocals. The music is barely more than piano, which is fine and even that can be interesting until you realize is the same parts over and over for 6-13 minute stretches (note the beautiful start of "Snowflake" that just repeats and repeats and repeats).

For me, "Among Angels" is the only listenable track that shows cohesion and melodic process the entire way through.  It is not to say it is exciting, but it'd be great for your Shavasana.

"Wild Man" starts out ok and then just deteriorates.  And for the flack I've read about having Elton John "sing" on this record, "Snowed in at Wheeler Street" is just dull and John is just almost a non-entity.  He only sounds like his self for a note or two and could be almost any singer in this setting.  Throwing in a 9/11 reference doesn't work, but overall the song doesn't work either.

The title track is just iffy at best.  Her song about Pi on Aerial was much more entertaining than actually counting down the 50 words for snow.

This all might work for background music (like Windham Hill) , but this is not sit and listen music.  Not for me anyways.

I'd say 50 Words for Snow is for the hardcore Bush fans only, but until this disk, I would have considered myself one of those - and I'm not taken with it at all.

I never was a KB fan.

You write lots of great music and movie reviews. I would be interested in a blog about some of your favorite movie soundtracks.

what a disappointment! I love Kate, and this CD is (was?) on the top of Christmas list.

I'll respectfully disagree. I'm enjoying the album, much more so that her Director's Cut. But the "duet" with Elton John is my least favorite track; it's the only one that really feels as long as it is.