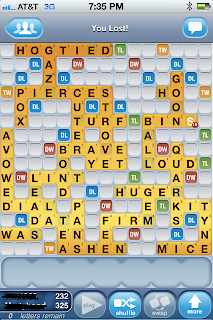 This one is just too easy - handed to me on a silver platter by Shinehardt Wig Company VP, Jack Donaghy. Ummm....I mean, Alec Baldwin.

I know I'm a cynic (no......it's true!), but Baldwin getting kicked off a plane for playing Words with Friends must have sent that app through the roof in terms of revenue and downloads.  I know five of such people who did it days after "the event".

If Mr. Baldwin wasn't already spokesman for the creators, he is now.  But to me, everything screamed "PR move" for the company for which Alec probably got handsomely paid.  Yes, I'm a cynic.

So, via Jon, the rest of our little email group all downloaded WWF so we could play with each other. Noooooo.....not like that.  Clean it up.

The game is a drain on battery and time. My iPhone battery dwindles quickly, or at least it seems to me.  Is anyone else noticing this?

I see why Alec wouldn't turn off the game on the plane. I totally get it. Minutes and hours go by either forming words or waiting for your friend to complete their word so you get your turn back. Instant gratification takes too long!!!!

Here is my exchange with Morty on my first game. 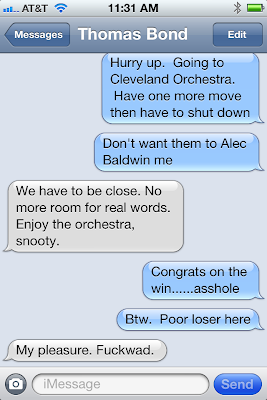 Oh, my contributions are in blue.  I'm a cynic and a sore loser.   BTW - I think 'fuckwad', is a triple word score.  Congrats Morty!

Naturally, we got the 'free' version, but you get what you pay for:  tons of pop-up ads, which annoy the 'fuckwad' out of me.  Mort ended up shelling out for the $2.99 version and I can see me doing the same thing.  Becca said she'd pay for it, but I'm not holding my breath.

Our initial thought was to have all five of us play, but I don't think that is how the game works. Sure I can have four games going at a time, but only playing Dith, then Mort, then Jon, then Becca. We're a group, we act as a collective on many levels.  Maybe not this one.

Anyhoo.....yes, I think I'll shell out the $$$ for the upgraded version, just so I don't see these ads. But it is something else to occupy my time - since I have so much of it.
Posted by Blobby at 6:24 AM

Like with Angry Birds, I don't think I'll be downloading this app. Scrabble is a big enough timesuck, and I only play the computer. Those of us with addictive/obsessive tendencies have to be highly selective or very disciplined. It's far easier to ignore it when you don't have it--but it sounds like a lot of fun.

If you have the iphone 4s there was a problem that they have or will be fixing - check Apple.com for update info.

RE: the battery drain? I turned off iMessage on my 3GS, and my battery life went back to the way it used to be.

Start a game with me! I can't because I have too many at once. I'm torn wordo natch.

I don't think I have the patience for that game