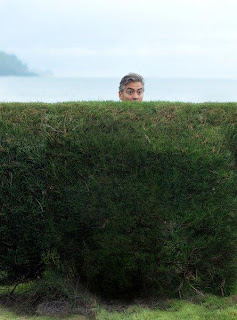 As g-d is my witness, and after years of making bogus attempts, we have made our goal, well my goal (710 was along for the ride) of 12 movies in 12 months.

We didn't even eke it out with a movie between the holidays when we are both scheduled off.  There is still two weeks left.  Even better yet, we didn't have to see Mission Impossible (or possibly the longest BMW commercial ever!) to get to the home stretch.

Our oft-going movie partners, David and James, axed us to go see that Tom Cruise probable piece of crap. James likes the popcorn movies, since over the decades, David has subjected taken them to the Hungarian sub-titled, never-seen-by-anyone-else films.  I like big budget action thrillers too.......to a degree.  But I am not a fan of the former Mr. Kidman, and I have managed to avoid the previous three releases, so why start now?

As it turns out, I had to work too late to drive to see the IMAX version anyway, so we did a detour and went to a local cinema and saw the Descendants.

It's gotten rave reviews, even with most of our group, as we sat around eating dinner afterwards.  It's a good movie and well done, but I rarely rave about anything.  I'll be more than kind here, but I won't rave.

The buzz is all about Clooney.  George certainly has his moments here, but he's not all that nuanced from role to role.  He didn't seem all the different here than Ides of March or Up In the Air.  He's fine and like I said, he has a true connecting moment or two.

The person who held my interest in the movie was the girl who played Clooney's oldest daughter, Shailene Woodley.  She really made every scene she was in work to her advantage, and to the movie's advantage as well. They talk about this being Clooney's award season, but she is equally deserving.

I also liked the father-in-law.  Tough as nails and heartbreaking for the few moments he is in the film.  And "Kitty" from Arrested Development is in it, so it can't be all bad.  And it is the first non-comedy I have ever seen her in - and she does a good job.

And while at first, I was annoyed at her tag-along boyfriend, and what seemed liked the obvious comic relief, there are just two lines from him that tie things together on how people cope with horrible situations.

I don't know if you call this kind of movie a serious adult comedy or a light drama. It has elements of both, I suppose. The story and directing work. There are moments of overacting from some ancillary cast members, but you deal with that.

P.S.  We got into the movie for free. I went to get tickets while 710 parked, and they said Key Bank was paying for our tickets and popcorn.  We don't even have accounts with Key Bank!  A Friday night movie on the house?  Unheard of.  But I let them incur the costs.

Oh, and P.P.S.,  Michael Ontkean has not aged well.

Song by:  Todd Rundgren
Posted by Blobby at 8:55 AM

Technically, this one isn't even on my radar... but glad you liked it and it sounds good.

good for you, for making your resolution!