I was at my cousin David's house a few weeks back and saw a picture of my parents attending his parent's wedding.  Did you get all that?

The year was 1956 or 1957. Depending on that actual date, my parents were just married or possibly still "dating".  It is weird to think of my parents pre-marriage, as they've been wed for 55+ years. 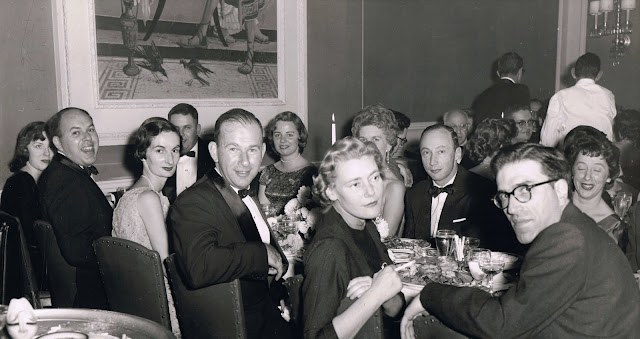 My father and mother are in the foreground second and third from the left, respectively. I don't ever remember seeing my dad smiling like this, let alone in a photo.  It is fun to see.  I like woman (the X-Files look-alike lady) next to my father, staring at him. Or more to the point - staring at him in utter disbelief.  It probably wasn't the first or last time someone has done that.

Yes, my mother was rail-thin.  She still is.

I'm 89% sure that my grandfather is the unobscured man on the other side of the table, looking directly at the camera, but I'd bet dollars to doughnuts that is not my grandmother next to him.  I'll have to ask on both counts.

Then there is that blonde lady who is clearly more captivated at something going on across the room than anything happening with the people at the table at which she was assigned.

David was kind enough to let me borrow the photo. I took it home, scanned it and sent it out for printing. They are getting an 8x10 for their birthdays, which are today (dad) and tomorrow (mom).  I'll be curious to see their reaction.

For our own house, I got a 5x7 copy to place on a shelf. It's nice to have reminders of the history from which you came.  Oddly enough, the only framed picture I have of my parents was taken at David's sister's wedding.  My father might be wearing the same tux for all I know.  I'll have to ask.

Who is the beau-hunk in the round glasses? You're parents really haven't changed all that much!

Love this - and such a great idea for a gift.

Love it! I'm afraid that these sorts of pieces of our histories are disappearing. I'm really glad that you have one of your own.

Merry Christmas and happy birthday wishes to all.

I love old photos like this.
It is another example how all photos should be marked on the back. People assume the viewers will always know who the people are - and it is lost in one generation.

I'm glad you commented on Scully being there. Because she was kind of freaking me out.

No Jon - my parents are very much the same as they were 55 years ago. ...and the man you refer to in the glasses is a 2nd cousin of mine and long dead. Apparently the blonde woman was his first wife.

I can't believe I typed "you're" instead of "your". Ug. I hate it when that happens.