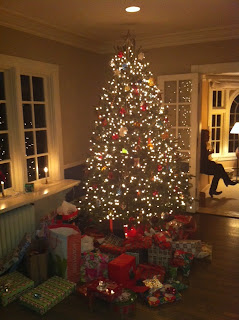 They're gone. All of them.

As predicted, too much food was on the table last night and too much never eaten:  tenderloin, salad, cheese plate, fruit salad, shrimp cocktail, vegetable tray and a cookie tray.  Oh, and a full bar - hard liquor, beer and wine. What more could one ask for?

Oh yeah, and throughout the house, an assortment of nuts - and I'm not talking about my family.

Also as predicted, I barely had anything from the bar. Two partial glasses of red. Just too many distractions of making sure everyone had anything they needed and wanted.

Not unexpected was that the 80 and 90 years olds stayed the latest. I mean, where else do they need to be? Nowhere - that's where.

Still, we didn't rush rush to get stuff done. Usually we are still dressing and showering when folks arrive.  We were ready well before the first doorbell rang.

Yes, we had a few snafus, such as every light going out on the tree hours before arrival.  It turned out to be a short in the extension cord. And well, then there is my present wrapping. I do a horrid job.

For fun I thought I'd show you two of our ornaments - one old but newer. One old old. 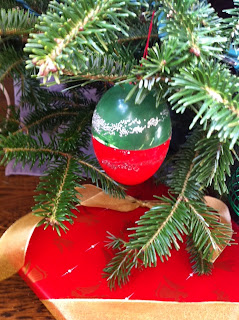 Remember L'Eggs?  I mean, they still make them, but not with the plastic egg that never will disintegrate in any landfill ever. But in 2nd grade, while in cub scouts - yes, cub scouts - we made ornaments.  Clearly, I still have mine.  I'm keeping it to save the environment. I might be gay, but bad at wrapping and bad at art - I'm clearly missing a gene that goes with being a homo.

I have not missed the irony that an organization like the Boy Scouts, who spurs gay men, gave us paint, glitter and women's panty hose containers to decorate. 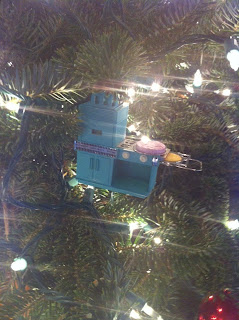 Then there is someone else in this house whose mother gave him an Easy Bake Oven ornament, and who asked her gay hairdresser (duh) to help acquire it as a gift.  710 had an Easy Bake Oven growing up. Probably not as much for the making of substandard treats, but to figure out how it worked, by taking it apart and reassembling. The ornament smells like vanilla.

I did fail this year. Usually we exchange one ornament so we can have new ones and we try to make them memorable. But I did not get one. I never even looked for one. It's probably ok to skip a year here and there.  I won't feel nearly as bad if he skipped this year too.

Have a great day today.

Merry Christmas to you and 710!
There's always the after xmas sale for 2011's ornament.
I loved my sister's easy bake over.
Thanks to you I now have my own gift wrapped clever water storage system!

Merry Christmas to you guys. It's quiet here too....after we both went to Phoenix and back. Relaxing and enjoying. Big hugs.

happy holidays to you and the mister and sophie, blobby!

How was your L'Eggs Benedict?

Hope you had a wonderful Christmas.