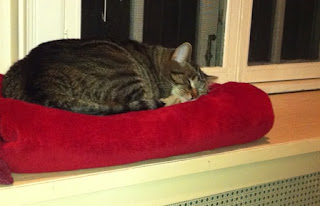 I don't think its inconceivable (say like Wallace Shawn) that after the holiday one feels like doing nothing.

As you can imagine, since I don't go for crud like 'Black Friday',  I am certainly not going out the day after xmas to look for any bargains.

First off, I need nothing that badly, nor do I need to fight the crowds if I did.

As you can see, Sophie was big on the naps too.  All those folks in the house the night before stressed her out and she was happy to have the house back to normal.  So was I.

Xmas night though, we did finally stumble upon Downton Abbey.  I think it is just a slightly updated version of Upstairs Downstairs.  I'd probably know that if I had ever watched that. Of course we came too far into the marathon to see all of them, so now we'll have to search and DVR them and catch up before Season 2 starts.

Yesterday was slightly more lively than the day before. We showered!  We went out!  We had lunch with Rebecca and her husband!  I enjoy them so much.  Lunch went way too fast and it seems I couldn't stop eating the hummus.  I suppose it's better than eating chocolate. But it would have been fun spend more time with them. I totally get I have an expiration date.

Later, 710 and I walked the 'hood and while sunny, I froze my ears off. I sholulda had a hat, but I didn't.  During said walk, I had an urge for hot chocolate, which I'm guessing I have not had for at least a decade.  BTW - Ghiradelli hot chocolate mix ends up being so rich, it's like your drinking hot pudding. Too thick for me and it easily forms a skin.  Ick.

I'm off all week, so while I won't be as lazy as the last two days, I'm not expecting huge strides in solving world hunger or disease management.  It'll be enough to get my hairy ass down to the gym a few times before the new year's resolution folks take over.....for their annual three-week stint.

Song by:  Ella Fitzgerald
Posted by Blobby at 5:58 AM

Go for the naps. Yes!

Lol what you mean expiration date??

Funny, they did a short story about Downton Abbey on the NBC Nightly News last night (Jan. 9) and now I stubble upon it again while catching up on reading your blog. I guess that's a sign I should look for it on Netflix.