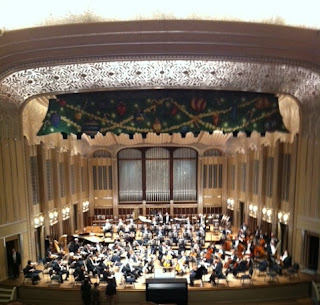 Oh how I love 710.  You know I do when I go to the symphony with him.  My exposure to classical music was what they added to Looney Toons.

Morty texting "(Mr.) Snooty" while standing in the lobby made me laugh.  Yes, everyone knows how I hold my nose up and lift my pinky.  I added the "Mr." since I am sure he meant to address me accordingly.

I certainly find appreciation in classical music, but it is not my first choice of stuff to which I listen.  It probably makes the top six genres but truth be told, it's what I hear is on the radio or from something 710 owns and plays.  I own nothing.  I mean, I'll listen to it before searching out hard-core rap, speed metal or reggae.

I would say I'm a bigger fan of Bach - at least one of them Bachs - than most decomposers.

Growing up, my mother listened to a radio station we got in clearly from Michigan. I guess those WJR airwaves crossed Lake Erie nicely.  Daily, I was subjected to Adventures in Good Music with Karl Haas.  Mr. Hass always had a soothing voice, even for a growing tot like me.

And whether I liked it or not, I probably learned something.  Damn that unintentional education!

Last night was date night and Denton took us to the Cleveland Orchestra.  Well, I took us, as I was the one driving, but it was his idea and he was paying - even if it was from the joint account.

Cleveland has one of, if not, the best orchestra in the world and one of the best venues to hear classical music.  Acoustically, it might be near perfect especially after the renovation a few years back to refurbish / reinstall the pipe organ - which they used last night.

The program last night was hit or miss.  Barber, Bernstein and Camille Saint-Saëns. I had never heard of the latter, but that is really what Denton wanted to go for as the piece they played, "Symphony No. 3", was what they rolled that organ out for.

Barber was good. I like the piece and the brass portions.  Denton first said they were doing a Copeland piece but it was Barber. Contemporaries, so I'm told. I guess you can hear that.

Bernstein? Eh. The man certainly had a style. One. Singular. He didn't veer too much from it and after the piece finally (insert mental image of Blobby checking and rechecking his imaginary watch), Denton said something about how he was waiting for the Sharks and the Jets to arrive. I think they got tired of waiting for the segment to end and went home to knife themselves.

The highlight was the Saint-Saëns piece, but for me, it wasn't for the organ. Considering it is known as the "Organ Symphony", I didn't think it was prominent as I anticipated. At some points the strings were just incredible as was the percussion section. The organ was ok, but pipe organ reminds me of houses of religion - it cannot easily separate the two.

Naturally, after we sat down, I felt the need to cough. I always do there - even when not sick. It is some kind of stimulus - response kind of thing.  I thought ahead and brought Lifesavers and used those to get me through.

Oh, and there was a girl conductor.  Sorry - female.  I've never seen that before.  But to be honest, save starting the group, I find conductors to be useless. If you've made it to the Cleveland Orchestra (or even my high school concert band!), you should be able to read music and count measures. All that waving and mincing seems over the top for people who aren't looking up from their sheet music to see a gal and her baton. Surely I am over simplifying, but perhaps I am not.

710 and I brought down the median age by about 22 years.  We always do at these events, and let's face it, we are no spring chickens anymore.

But if Mort thinks I'm 'snooty' going to the orchestra, decked out in a suit (sans tie) he's right. Ask the guy in front of us who was wearing sweat pants. Oh yes, I did judge.  I did.  Nose held high in condemnation.

The Cleveland Orchestra and Apollo's Fire are two reasons to love NE Ohio.

Nice! I'd love to have gone!

First of all, it's "Copland" not "Copeland".

Secondly, what Barber did they play?? He's a fave of mine.

And Third--- how the fuck do you not know Camille??