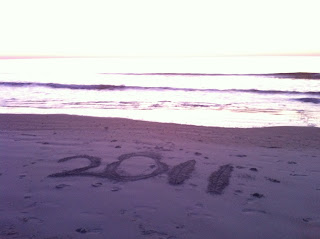 Au revoir 2011.  (can you believe I've been holding onto this image I took on a NC beach on Jan 4th of this year?)

For the most part you've been a pretty good year.  As with all of you containing 365 rotations, we have had our ups and downs.

I am optimistically saying we've had more ups than downs (not Upson Downs) this year - and that is not always the case, so for that I thank you.

Visiting with longtime friends has been a big plus this year.  Quite a few visits, in fact.  Everyone was in high spirits (and I'm not actually talking about the booze), and everyone is in relatively good health, save a detached wire or two to an internal defibrillator.  There is that nagging tendinitis that I continually experience.  But other than that............

We watch our parents age and internally we wonder.  Or I do.  Of course, I wonder about myself as well. It's my nature.  Any number of friends have said this year, "it sucks getting older".  It does, but I'm getting tired of hearing that.  My eldest sister pointed out years ago that you know you're old when you start comparing maladies. I have so been there since my late 30s.  Maybe my 20s.

This year has seen some losses in family and that has been sad, but we've had some additions in friends. I'll ignore the whole 'circle of life' thing.  Some of those new friends are joining us for dinner tonight at our house. I'm thrilled.

A big plus for 2011 was having had the opportunity to meet three bloggers friends with Dr. Spo, Stevie B. and John.  They were hyperlinked yesterday - and you know, I'm not giving it away for free. If you want to see their sites, you have to work for it a little. You have to want it.

The blogger meeting count would have been five, had it not been for BosGuy and Mike's busy busy schedules - ones that didn't involve me.  {sigh}  (I am giving it away for these guys - hey, they weren't hyperlinked yesterday!)

Then there was that pesky high school reunion. Eh, I got 2-3 blog entries out of it. Not a total loss.  And also had that semi-decade event when all of my sisters and myself were in one place. The rapture didn't happen in May nor the world end in October or again when the five of us were all in one room.  Further proof that g-d might not be all that.

I switched jobs, but at the stayed at the same company.  That alone has its ups and downs, but what job doesn't?  And with the new job, I'm sleeping better.  As bad as my sleep normally is, with the last position, it got worse. Before I'd wake up 3-4 times per night, now I don't and only sleeping four hours per night. I'm now up to six, and no interruptions.

It's been the wettest on record and I'm tired of that - it's even raining now, insisting on one more frickin' day of precipitation. Bastard!

Still I'm ready to move on from this year.  Time moves forward and hopefully so do we.  What's the alternative, really?

1) Love the picture.
2) Le Sigh... wish we had met and look forward to a future visit I hope.
3) Wishing you much love and happiness in the coming year.

happy new year to you and 710 and sophie! smooches!

Thank you for being part of my 2011. My journal reminds me I met you in person this year, for which I am most grateful.

Who ever heard of daquiris made with HONEY...

And thanks to you I am now addicted to Clementines. Curse you Blobby (although I suppose there are worse addictions)