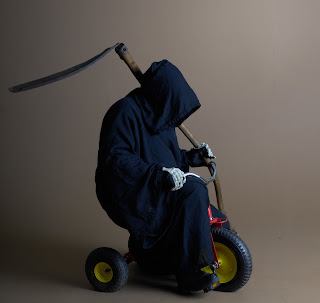 I haven't blogged about a dream in a while.  Remember when I used to do that all the time?

I still have dreams - and I don't mean like dreams and aspirations.  Those died when we got a house and had to pay mortgage and play "grown-up".

The dreams I speak of are the ones after I close my eyes and go off to la-la-land.

I used to have some very vivid dreams, that I would recount here. I still have dreams, just not as often and usually not enough to remember let alone commit to the blog.

Perhaps it is time of the season, but the other night I was visited by three......well, not ghosts, but three versions of Death.

They all were a cross between the regular robe and sickle angel of death and a Dementor.  The first one scared me a bit but I remember yelling at it face-to-face and he just left.

The second encounter was just that.  Unnerving, but no face to face. She - yes she - walked down the hall and past the room I was sitting in.  She had a smaller frame than what you'd think of Death being.  Also the robes had very very slight tinges of red where you'd normally see the garment frayed.  Of course, that's how you knew it was a she!

It was the last one that was weird....and maybe I'm taking it from seeing too much Harry Potter and the Deathly Hallows lately.  If you remember in Part 1, they tell the story of The Tale of the Three Brothers and how the last brother greeted death like an old friend.

That is what it was like.  There was a niceness and calm to meeting Death in this dream.

Clearly I am not dead - or perhaps I am blogging from beyond the grave.  Oooooh.......spooooky.  I woke up a little off-kilter but still very calm, as one might imagine.

But, at least Death wasn't a woman!

I still have dreams - and I don't mean like dreams and aspirations. Those died when we got a house and had to pay mortgage and play "grown-up".

Is it sad I laughed and cried at the same time when I read that?

Sorry, I only do dream analysis for cash.