Love is a Battlefield 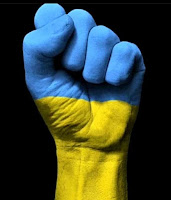 Semi-full disclosure.  I might be part Russian. I just don't identify that way.
Ancestory had me designated as "European Jew". It seemed a fairly broad swath, if you axe me.
The tale was the family is / was from Bavaria, and that might be true......on my dad's mother's side. But his father's father's father?  It is probable that there is more Polish and Russian lineage.
Pick a country - in any instance, it didn't end well for the Jews.
So, I'd rather identify as cis-vague Europe than cis-Russian.  ....even if it's a small percentage of who I might be.
While I still actively try to avoid as much news as possible, it would be foolish to think one doesn't take note of Russia invading Ukraine.
I'd ask: how does this even happen?  ....but that's fairly clear:  everyone talks about it about to happen; no one actually does anything.  Oh - except the ever ineffective "sanctions".
In olden days, countries invaded other countries. At best they had Paul Revere or the telegraph. Very few, if anyone, knew it was about to happen. Sure, allegedly FDR knew that Pearl Harbor was gonna happen, and if true, well he was just a dick warmonger. New Deal, my ass.
But in these times, it was talked about for weeks, maybe months. Hell, you and I can probably watch troop advance via Gooooooogle Earth.  But with 24/7 news coverage, we all saw it coming.
I believe, even with Russian troops at the border, Putin claimed there were no plans for invasion.
Huh?
Guess just a bunch of troops were out to get their 10,000 steps in - oh, and Putin is highly reliable in terms of sincerity, honesty and ethics.
I won't play stupid here - I AM stupid here!!  What is the end-game?  Is the idea to take over more land and expand the country? And even if so - why?  Is it to show he has a slightly bigger than average sized penis..........metaphorically speaking. The 'show' part, not the 'penis' part.
I totally get that I don't understand the evil guy in his lair, headquartered out in hollowed-out volcano. But I really don't understand the ego for need to be president either - because, for the most part even that isn't public service. But ego to invade and kill ?   That is truly beyond my comprehension.
This doesn't even seem to be military to military-related. I'm seeing pictures of cities bombed, buildings in ruin.
I'm a fatalist by nature, so that if this turned into WWIII, it would not surprise me in the slightest. But again, to what end?
I'm guessing there is irony - and actual logic - somewhere here?
The GOP are the ones that are usually the US war-mongering faction. Butttttttt.............in the last 6-7 years, they also seem to be the tongue-up-the-ass Russian / Putin loving faction. They are really stuck between a rock and an anilingus situation right now.
Except that they're not.
They'll put this all on Biden.  If he strikes and sends Russian troops scurrying, it will be how badly we treated Russia.  If he strikes and loses, well.............then he's weak.  If he does nothing........he's weaker.  This is lose-lose-lose for Pappy Joe.  And it's exactly for all the GOP could hope.
I'm cynical enough to believe this was all set up by GOP/Putin to fuck with the mid-terms and the 2024 election. The timing is perfect for both. And honestly, if true, they're doing a tremendous job.
Maybe I'm wrong from earlier. Maybe I do get it after all.
Song by: Pat Benatar
Posted by Blobby at 12:07 AM

Pres Putrid, with power gone to his polished bald head, continues acting with all the arrogance and self-belief in invincibility as those Czars (and monarchs) of old. From what I can gather, his luxuriant mode of lifestyle already outdoes any of those former despots. So much for having once been a Communist which, I dare say, Russians are not now allowed to mention - under pain of death!

His reasons, possibly only he really knows. Trying to impress he who must not be named?