Caught in a Lie 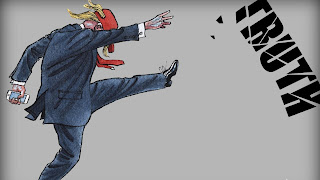 I wish circumstances were better where 13 months in I didn't have to think about BLOTUS. But this country is so fractured, it'd be stupid not to think of him.

By some accounts, that Canadian trucker protest / takeover will head south of the border - and other takes on it is that dick knobs (is that one word?) like Michael Flynn - former General / current traitor - is more than a little behind it all. I guess he took the previews to Ottawa to see how it performed.

Still, I have been playing BLOTUS / NOT Pence 2024. Probably BLOTUS / Manchin.......but that's another concern for another time.

BLOTUS claims he won the 2020 election, right?  So do all his minions, the folks who voted for him and anyone who is six feet under due to the insistence on not getting vaccinated.

I've got two words for you:  Term Limits.

If he won the election, that's two terms. He's done. He is ineligible to run again.

In exposing that truth, well.......it literally might kill him.  Again, something I'm all for.

Yes, I know those minions, voters and dead people won't hold his admission of losing an out, but it would fill me with such fucking glee, I can't tell you.

Honestly, anymore, it's the little things - because the big ones make me feel anxious and upset. I'll take the small victories.

Of course, who the fuck is actually going to call him on this though?  I'm going for Liz Cheney .

Song by: the Hics

Brilliant, but you knew that