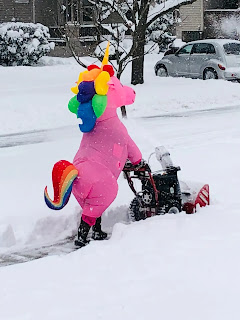 If it's possible, sometimes you want to be altruistic and somehow still get the credit.
Yes, I totally get it's a contradiction, but I still want it.
Two houses ago, some nice gentleman we didn't know used his snow blower and cleaned  the sidewalks on both sides of the street. We never knew who it was.
We would take our blower and do our next door neighbors who were older.
When at the last house, we had no sidewalks and the neighbors were far away. So we only did our 100' driveway.
But this year, we've had a bunch of snow. And as it turns out, when you have a dog to walk, clear walkways are mucho important. Those who don't have dogs, or don't walk them, are seemingly unaware how not clearing their own walk is mucho annoying.
Still, we like our neighbors. So these last weeks, 710 (mostly) has been out and clears like 7-8 houses of their sidewalks.  There is no win in this, save for us and walking Shep. No one is getting credit. This is ok, since I'm 93% sure they don't know we / he did the job anyways.  I'm not even sure they've been out to know it's been done at all.
There is a guy (?) in Lakewood - which is arguably the gayest of all Cleveland suburbs - who was photographed cleaning the sidewalks on "their" street. Everyone claims not to know who it was, but.......c'mon.  Someone in a shocking pink unicorn costume just doesn't disappear.
I mean, it's great not having their identify revealed, and it would be fun to see that unicorn just going up and down the street, so there is magic to the story.
Now I just need to get 710 a good outfit.
...and we're gonna need it. Allegedly we have 8 inches or  2-3 FEET (depending to which forecast one listens) of snow headed our way starting this evening - going until late Friday or early Saturday. Let's hope they're wrong.
I can't possibly get a T Rex outfit delivered here before the snow fall.
Song by: Dan Fogelberg
Posted by Blobby at 12:07 AM

I hope Amazon has that on same day delivery, LOVE the Unicorn outfit.

I don’t envy you all.

Gotta love Lakewood. But this makes me happy beyond all words. It made the news back here in Baltimore.