You know, last month, I featured the similarly titled Wordle, as my App of the Month.

Being the influencer that I clearly am, after that got posted, the game took off - so much so, that the New York Times bought it and now everyone is posting their scores on social media so they can show they're smarter than other people on social media.

The bar is low.

Of course, with the success I helped build with Wordle, all the imitations soon came afterwards:  Lewdle (dirty words), Quardle (don't ask...as I don't understand this one); etc.

Morty pointed our little group to Worldle - which combines the limitations of Wordle's six attempts with guessing a country or region in the world with the fun of my Site of the Month five years ago!

So far, I have only seen countries being played, not 'regions'. If the game sticks to this, there are only going to be 196 puzzles.

Now, I can name the 196 countries and by continent. And I know mostly where each is located on each continent. What I am not 100% sure on - or even 86% sure on - is the shape of most countries (I dare you to say you know the shape of Moldova!).  .....but that is the clue the Worldle folks gives you. 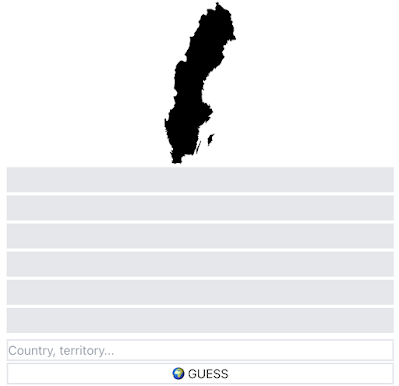 This is it. Probably not to scale (I'm guessing) and unless it's Italy or something easy - like Wordle, the first guess is just that, and hopefully and educated one. Like Wordle, you only get six attempts. 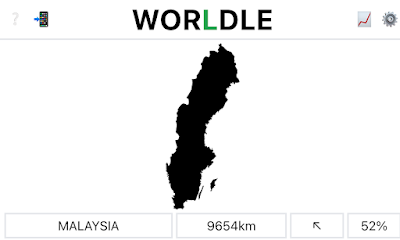 Should you not get the country on first guess, it will tell you how far away it is by kilometers (metric! THANKS for nothing Jimmy Carter!), and the general direction with which you should be headed.

I won't lie - I don't understand the percentages at all.

I guessed this as 'a region'', as you know(?), Malaysia is kind of a string of land. I thought maybe Indonesia, but that string has more angles to it, and not quite as vertical.  Clearly I was off by almost 10,000 km and I needed to head northwest.  So......I did.  Kind of. 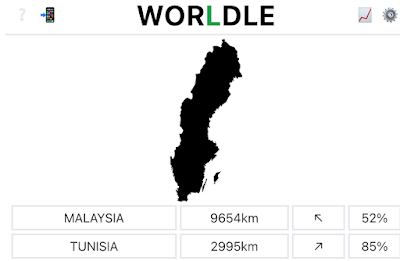 Tunisia is somewhat shaped like this, as it sits at the top of Africa. I thought it a better guess. I guessed wrong. No to the north east by 3000 km, or so.

At this point, I could only think of one of countries it could be. And it was a coin toss. Yeah, I know the two are next to each other, and I almost never remember which one is between Finland and the "other" one. 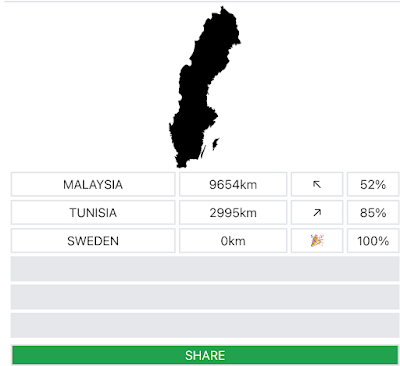 I was going back and forth between Sweden and Norway, because I always forget which one is which in terms of left to right. I knew it was not Finland.

I find the shapes are tough when not surrounded by other countries, but I suppose that is the point, no?

So, before I go to work in the morning, and because I don't start my day early enough as it is, I now have to complete Wordle, get 'genius' on the NYT Spelling Bee and now finish off Worldle before I even shower in the morning.

At the very least, I hope I'm staving off Alzheimer's by a few more weeks.