Someone Keeps Moving My Chair 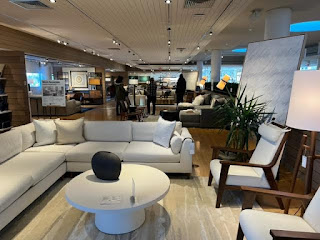 My friend Jon said this should be my Shopping with Blobby segment, but it seems so spot on, it's just too obvious.
I'm a gay who is just not built for shopping.
I hate it all, save maybe groceries - and even then, not always.  Clothes, shoes, cars, housewares are all just awful experiences most all of the time.
The charm wears off after about 97 seconds. Due to that, I have ended up making poor choices in all those aforementioned categories.
This is why when I find a pair of work pants I like, I just get 4-5 pairs in every colour and call it a day. I try on one pair and assume the others will fit. Ditto with shoes.
It becomes problematic with automobiles, because, deep down, I kind of really like cars. I just hate the process SO much. This explains the four bad Mercedes years I had. I ended up HATING that car and it was mostly due to just finding a car and being done with it.  Expensive failure.
Furniture shopping is..........well.......complicated. It's not like clothes or even a car. Harder to select. Harder to visualize how it will work. Harder to get rid of.
In our first house we I made some quick decisions so we could "fill the house", which we would find out, sooner than later, were things that we didn't really want, like or actually fit. And I'm talking most of it. At this point, one of my nieces is the recipient of more than I care to admit - and some was just given away when we moved to this house.
Yes, we lived with some of it for 22 years before ridding ourselves of most of it. We still have three pieces that I'd still be ok with 86'ing.
So this time: new house, new beginnings, new furniture. At least for the main floor - the living room and library specifically. And we've been here about 20 months, living with the space while making very very slow decisions. Covid has not helped matters at all.
710 and I have had several failed attempts at shopping in the last year. With thousands of choices, oddly, there was little to nothing that felt right and to the point where we couldn't and didn't want to step one foot in yet another store. To complicate matters, of course, we don't always see eye-to-eye on style, size, colour, etc.
Yet I've been pushing to make the move and start looking and making some decisions. It doesn't have to be all of them.
There's been a lot of looking on-line. A lot of discussions. Through this, we narrowed down a number of items from a few different locations. Saturday, I made us get out - leave Shep at home - and go look in person, with targeted items, thus limiting our look time, and decrease our / my frustration level. Because, let's face it: if I'm frustrated, I'm gonna make 710 frustrated.  It's science.
Stop 1 was for a choice of two sofas and to confirm we wanted to living room chairs. The chairs decision was agreed upon quickly. The sofa took some time. Now it wasn't just two - but one had two variations, plus the other option we were considering. I nixed the one variation quickly and we were back to two. Our initial choice was no longer the front runner, but it had a March delivery time (allegedly). Our new lead one was in July.  Ugh. Supply chain!
We eventually went with the newer lead, but between the time we sat in it to the time we ordered it - you know, 20 minutes - the delivery time is now in September! The chairs, sometime in May. Allegedly.
While there, we also looked at window treatments and rugs and Blobby started to get fidgety because we still had one more stop. Between the two, we decided just to walk around, cool down and feel less fatigued.
Stop 2 should have been fast. We decided on two chairs for the liberry. I thought we did. But then there were different leather choices. I was fine with the display. Apparently that was just me. Francis (well, that's what I named him) brought us a variety of samples and I had to compromise. But "Francis" was one of those cloying sales folks. He heard 710 use my name, to which he then used it frequently....and then to emphasize a point would touch my arm in the process...........in a pandemic.
I totally get the repetition helps him remember and tries to make a connection with me, but it just felt weird to me. He mentioned his husband once and I whispered to 710, "how dare he thinks we're gay too!!".
Listen, if I can't have fun during these excursions, you may as well just physically torture me. Though you never know - I might like that.
We thought we'd be gone like 90 minutes.  Three hours later we were home.  Totally, mentally spent.
These are not all we need, but it's all I could stand for now. It will come together eventually. With delays everywhere, maybe not until 2023, but.............it'll happen.
I think.
Song by: They Might Be Giants
Posted by Blobby at 12:07 AM

Sounds like a true nightmare. I used to enjoy custom order . Not anymore.

Furniture is probably the hardest to shop for. Likely why my dining room chairs are 97 years old.

Speaking as one, hire an Interior Designer. You'll save more than what it costs and have pieces that actually work for you.

Right there with ya on so many levels.

Calvin - we did that last house. Somethings were fine but not unlike furniture, we didn't know how to pick one of those either.