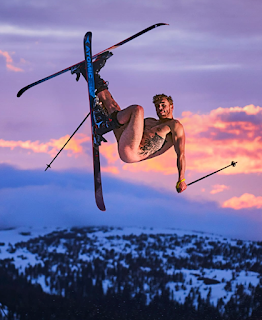 There is an inherent danger for the Olympic committee to continue to pick locations for the Summer or Winter games that blatantly oppress or kill citizens, and threatens to punish athletes and visitors who speak freely about such things as forced labour human rights, LGBTQ stances.

Pretty much Sochi 2014, but with possibility of pot stickers instead of borscht.

To be fair, the IOC probably can't readily find a locale where humans and government are not total pieces of shit.

It won't be hard to miss the games, and there isn't anyone I HAVE to see, I don't think, so I shan't be partaking.  Though, if I catch Gus Kenworthy's (post image) runs, I won't be mad, even if he is skiing this year for Great Britain.  He was born there, dontcha know.........oh, and didn't make the U.S. team.  And he vows to not keep silent on China's human rights violations, so.......yay!

But to leave this on a "high" note, I'll give you and SNL skit right before the Sochi games of 2014.

I won't be watching any.