You know, there are other things I'd rather be writing about other than Lady Graham (I think), but contractually, I am obligated to do so.
And until yesterday, no one wanted to write (or read) about Ms. Linsdey's sex life - least of all me.
(honest to g-d, I wrote the above and had to take a mental break for 55 minutes before even thinking of continuing.
It seems some FSSW (I had to look it up: full service sex workers) have started coming clean about being hired by Senator Graham.
Their  - or at least the initial guy - was clear it was not about outing him, and it was written in a positive manner - to a degree. They are very sex-positive, even in regards to Priss Graham.  They're not (or weren't) making judgements on his sexual habits.  But still............it gets weird. 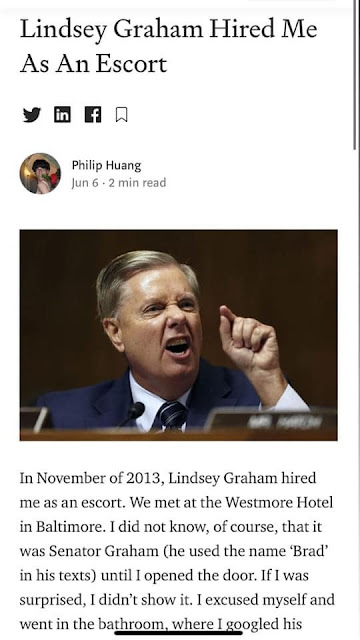 That part of the story cuts off there....but it picks up here. And I am apologizing in advance for ruining your breakfast, brunch, lunch and / or dinner.

I mean, the question of the 'on all fours' was answered, though it wasn't really a question, was it?
The ladybugs / moles? Ew!!   If I were a betting man, I think he meant to say, "anal warts".  Either way:  Ew!!!
I don't give a fuck that Lindsey Graham is gay. It's hardly a shock. To anyone !!!  He's a 65 year old, single / never been married guy. The lilt in his voice could be from gay-hood, or just being southern. It's hard to tell. But Imma gonna go with 'gay'.
I don't give a fuck that Lindsey Graham hired hookers.
Sorry - every guy has got to get laid now and then, and honestly, how else was a self-loathing faggot like Graham going to get that to happen?  It's all about the Benjamins. As long as he didn't pay them with taxpayer funds, have at it - ladybugs and all.
Naturally, his hypocrisy IS the issue.
Graham scores 0% by the HRC on gay rights.  Shocking!  Not.  This includes inclusion, marriage, adoption, the entire works. Let's not forget family values. But GOP family values in relation to hookers is a thin thin line. They think of prostitutes like family, so........
I love that Graham had sex workers sign non-disclosure agreements. I'm not quite sure how "Brad" had power of attorney over Graham's affairs, or how those NDAs are even binding.
I guess we are about to find out.
The bigger question will be: will all this hurt Lady G in November.
Fingers crossed!
Song by: Talking Heads
Posted by Blobby at 12:07 AM

His hypocrisy in ALL matters, personal and political, disgust me.

even if it were true I fear it won't matter a dime.

Haha
Lady G is a hypocrite and the thing is that with all this drama her constituents (who are as homophobic and conservative as she is) will have to face the fact that she loves dick. That may not go well with the Repukluxcans in her state.
Oh, the ladybugs. It's satire, but it gives you an IMAGE.