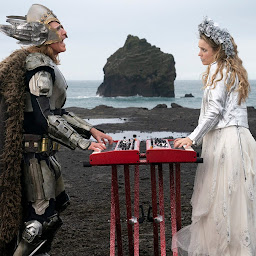 What do you call a comedy where you don't laugh even once?
Well if it were a tv show, it would have Whitney Cummings in it, but if it's a movie, chances are it has Will Ferrell as the "star".
Netflix released the 2+ hour Eurovision Song Contest: The Story of Fire Saga and it was a dud.....and from the preview, I knew it would be. Yet, this non-traditional movie thing has clearly limited options.
When I first saw the preview, my initial reaction was: "oh, poor Rachel McAdams".
I mean, she was great in the Time Traveler's Wife and Spotlight.  And like the movie or not, she killed Regina George in Mean Girls.  She's better than this. I mean, even Squeaky Fromme is better than this.  She fares better than Farrell in this movie, but so does any background extra...........and Squeaky Fromme.
One of the many problems is: it's all been done before.
You could call this Pitch Perfect meets King Ralph meets Blades of Glory meets Purple Rain.  There might be spoilers here.........so look away if you must.
Underdog singing group (Pitch Perfect) lucks into performing in Eurovision when all other Icelandic contestants die in freak accident (oh yes, this takes place in Iceland!) (King Ralph), gets in Eurovision with disastrous results (Blades of Glory) only to find it's heart and use a song written by another band member to win the crowd, if not the contest (Purple Rain).
One of the other problems: not one laugh. Not even a smile or a smirk. In two hours.  Maybe a raised eyebrow at Matthew Crowley Dan Stevens playing a gay / not gay Russian singer.
Ferrell has no one but himself to blame, of course. He co-wrote, produced and starred in it. Like almost every character he's ever played, he is a clueless rube striving for some unobtainable goal. I guess it kind of worked once in Anchorman.......so he just ran with it. In. Every. Single. Movie. He. Has. Done. Since.
And in Ferrell fashion, has to take his shirt off in it at as well. I think he thinks that will garner laughs like when he was on SNL.  It does not.
Like SNL, when there is a bad sketch and seems to go on forever?  Well now they made it longer and into a movie.
Poor 710 gave up about 25 minutes in and just read the rest of the time. But it still counts as seeing a movie.
2020 Movie Count / Goal: 07 of 18
Song by: Fleetwood Mac
Posted by Blobby at 12:07 AM

It's been getting mostly dismal reviews here too. Such a missed opportunity for mining this rich seam for comedy - and I speak as a lifelong Eurovision super-fan. It might be argued, though, that the subject matter has an inbuilt comedic structure which covers your being unable to decide whether given acts are doing a parody or are being deadly serious, making an attempt to make it funnier than it already is will only succeed in dulling it, and it sounds like that has happened here. Will Ferrell is generally such an on/off presence in any case - and sounds like this is one of his many latters.
It's a shame though as, when our cinemas are allowed to re-open this w/e [subject to distancing ordinances being observed] I was hoping I might catch it there. Shan't bother now.

I’m not a fan of Will Ferrell, never have been. The Saturday Night Live Alumnus that escapes me. I’m very surprised Rachel McAdams has turned out to be more than I ever thought she would. Still nice to be exposed to what I would never look At otherwise.

"if it's a movie, chances are it has Will Ferrell as the "star". "
YASSSSSSSSSSSSS.