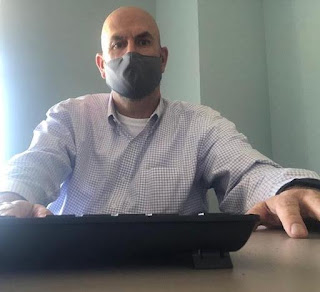 So, 3.5 months of working from home is coming to an end. Kind of.
We, well some of us, who are not direct caregivers are slowly, but surely, making our way back to the office, albeit with restrictions.
One must wear a mask. However, if you have a private office and have the door shut, one can take off said mask.
That is fairly restrictive for cube workers, because no one wants to wear a mask all day long. So for now, some of the administrative staff will rotate through.
I have a private office, so it's no skin off my back...so to speak. Actually, I have two private offices.
During this pandemic, I was asked to take on a new-ish role. I've done a similar role, but this is expansive. I have about 60+ docs under me with this, and right now, an unknown number of sites. I probably should know, but I don't. Not yet.
While I have been helping them out in the absences of a permanent replacement for the last two months, my actual first day officially was this last Monday.  Oh - and I'm also doing my old role as well.
In a normal year, I would be allowed to hire my replacement and have them report up to me - as it was an area in which I have accomplished a lot in the last 14 months. But it's not a normal year and healthcare organizations are hemorrhaging, so no one is going to hire anyone to replace me in 2020.
The new role will definitely challenge me. When your staff is that large, you're going to have issues and problem children.
If I'm being honest, the new role is a safety net. My other role is great, but it is not, nor meant to be, revenue generating. In a year when millions of people are losing their jobs, I cannot afford to be one of them. So, work I shall.
And I will put on a mask in my car, wear it to the office - where they will take my temp daily - and walk to my office where then I can take said mask off.
That all said, the mask thing is and isn't a little weird.
It's odd how easily we've adjusted to wearing them and seeing people in them. But normally, since we had rarely left the house, I almost never had to wear one. To the grocery store, for sure, but even that was a limited time.
The walk from car to office isn't that much longer, but you know. walking and steps. Yes, the glasses fog somewhat, but there are times when I have trouble breathing.
I think it's a slight problem made bigger by me thinking then overthinking I had difficulty breathing, which manifested itself into not being able to breathe. It's only happened a few times, and it probably a CO2 exchange issue, but the panic is real.
The more I wear it, the less it happens.
And while friends have made masks for me, they're not quiet office friendly, so I purchased solid colour masks. We shall see how it goes.
My plan is to try not to work daily at the office, but ease back into it and still do time at home. I'm not sure what the new bosses feel about that, but it sounds like they'll leave me alone to do my thing. Let's hope they stick to that.
Song by: Kelly Clarkson
Posted by Blobby at 12:07 AM

Stay safe. Our DC office is still closed, they sent us the reopening plan the other day. Masks, twice daily temp checks, no more than 25% of staff in, please don't ride public transit (my desk is directly above a subway station), don't use the conference rooms, and on and on. Fortunately they extended until further notice the option to work at home.

I'd like to hear more (and see photos of) the masks that are not office friendly...

Well, they're not nekkid folks or anything, but made from t-shirts from a brewery.

You have my sympathy, I respect that you are gonna put on your big boy pants and do what you have to. I’m sure you are gonna be handsome and strong. Anxiety is such a bitch !