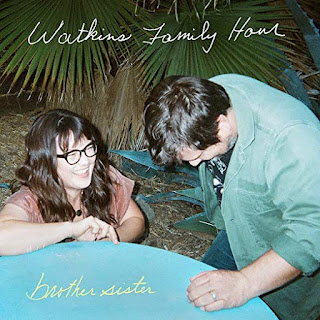 The Watkins Family Hour has a new disk out, Brother Sister. It's succinct - as this time around it is just basically Sara and Sean Watkins, two-thirds of Nickel Creek.
Last time out, under this moniker, they had other notables join them, such as Fiona Apple and Benmont Tench. The group play together a lot in Los Angeles at a club, but this time, it's just the brother and sister.
As Nickel Creek and both Watkins are steeped in bluegrass. You didn't quite get that as much with their last disk, but this time........you got it.  Kind of.  There are drums, which you don't usually get with pure bluegrass.
They start strong with the opener, "the Cure". Their voice blend well, as you might imagine having starting Nickel Creek as young teens and now into their 30s.  Sean's voice is clear, but don't have a lot of bass to it.  He does much better on "Just Another Reason".  They're full on honky-tonk-ish with the closer, "Keep it Clean". It's fun, but doesn't really do much for me.
You only get two instrumentals - "Snow Tunnel" and "Bella and Ivan", but they work so well.
The only cover might be Warren Zevon's "Accidentally Like a Martyr".  I think it's done well. Not quite as strong as Zevon's version, but a really good take.
If you're looking for Nickel Creek redux, you'll want to look elsewhere.
Posted by Blobby at 12:07 AM