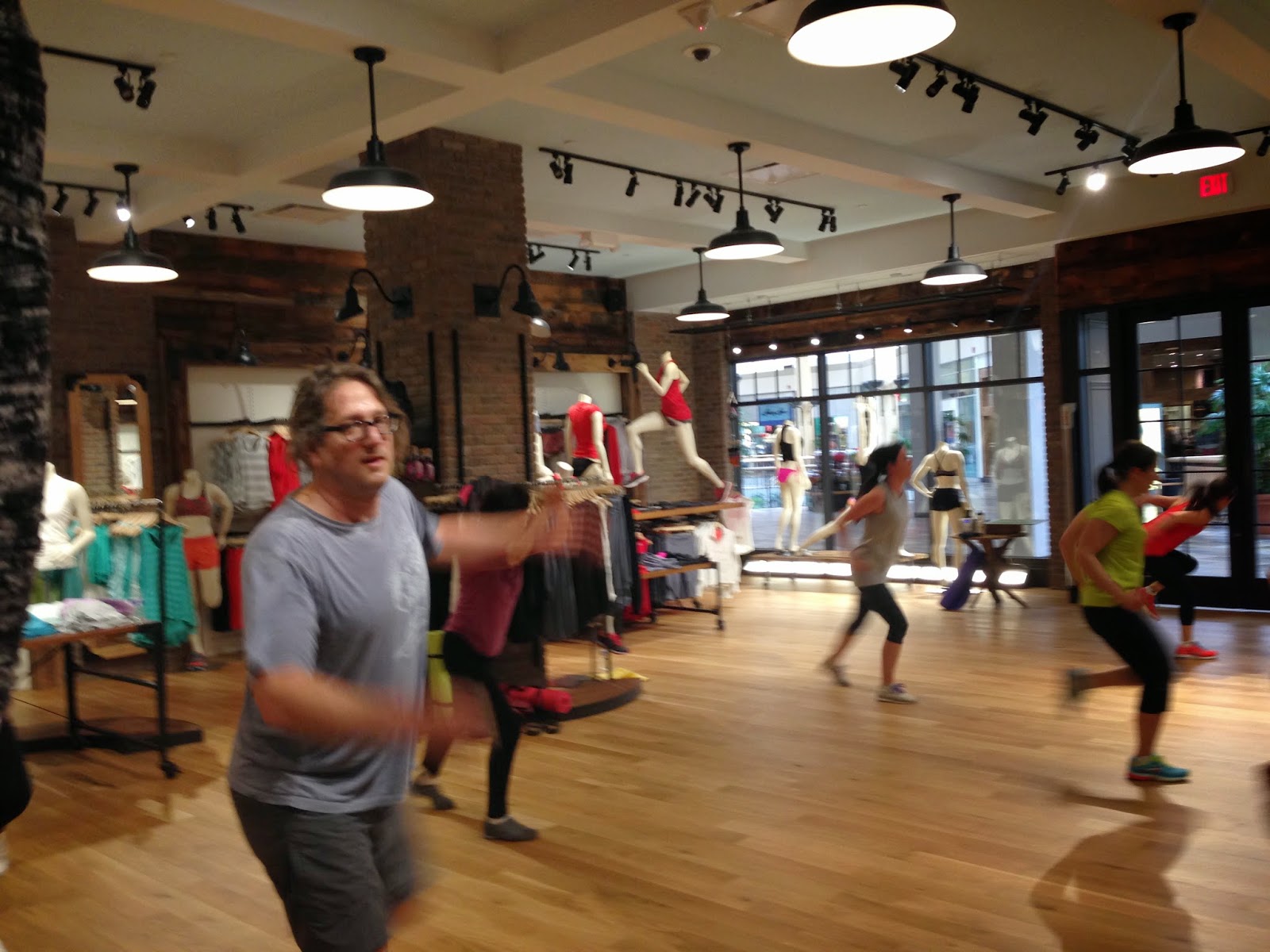 The place David and I usually do yoga (for free, mind you) on Saturdays lately has had no yoga. No zen. No being centered while exploring your body by way of a series of poses and twists.

This is disconcerting for a few reasons. The place that provides the service sells yoga clothing. The other reason is, we like our routine of a morning walk, yoga and then sitting and having tea or a fruit smoothie while yakking together.

The store still has an exercise class on Saturdays, but it ain't yoga.

Sometimes it is a barre class. We are the only two males there.

Sometimes it is a core / boot camp class.  We are the only two males there.

And last Saturday it was "Insanity".  And yes, we were the only two males there.

I've never done PX90 (or whatever it is called), but I'm guessing it is something like that. Three blocks of exercises, each repeated three times.

At the beginning of each block the instructor runs through each of the eight moves per block. And then you're supposed to be able to put those all together and go through the routine three times.

If you've ever seen a show with people in a dance class it's like that. They show you the routine once and you're expected to memorize it and execute it.

That is so not me.

So we go through what I think is the first block of eight exercises. I was dripping. David too. We looked at each other like, 'WTF??'  Then the instructor goes, "ok, that was the warm-up".  To which I said aloud, "THAT was the warm-up?"

At least it got laughs from the few people who were there - which consisted of 4 Asian women who showed up expecting yoga. 4 people who take the instructors class elsewhere, 1 other woman, David and myself.

I didn't bring water, because I wasn't thinking - so a few times I went back to the dressing room area where there was a water fountain. I tried to keep that to the time between the blocks, but that didn't always work.

Each time I went back there was one of the Asian women either sitting on a couch or looking through a sale rack. And to be clear, it was never the same woman. They just rotated out of class and around the store.

There were times that both David and I had the thought of just walking out of the store too.

I don't see myself as being and out of shape guy, but fuck it was hard.  My chest isn't big to begin with but I'm telling you it's not as firm as I thought.  Running in place and lifting your heels to kick your own ass, my boy-boobies were bouncing around.  Blobby needed a sport bra.

I can't remember sweating so much. But we stuck it out but with the promise never ever to return.

Song by:  Lindsey Buckingham
Posted by Blobby at 12:06 AM

A few years back I did something called "Extreme Bodyshaping" which used something similar to the P90 system. I was able to do about 4 weeks of it before my back finally gave out.

Turned out I had a bulging disc. Whoops.

Hopefully you can find another place to do yoga!

I'm surprised LuLu Moon (I'm guessing) doesn't have instructors lined up. It is a core part of their business plan. My friend managed one for a while - they are more of a cult then the moons or Waco. The things he told me. He started just as pt sales, he was already into Yoga, but he just became a certified instructor. He was my first bf - about 20 years ago.