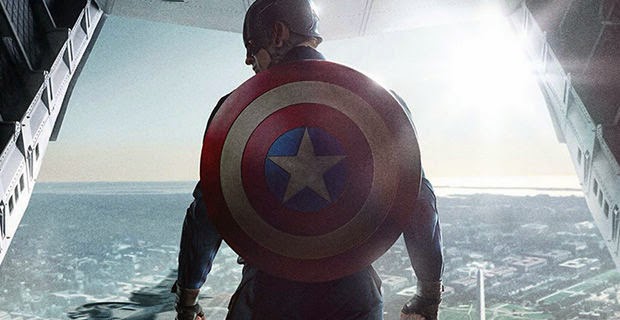 It's possible we are the last people on Earth to see Captain America: the Winter Soldier.  I mean, if the theater with 11 people in it were any indication.

It's been out about a month and a half, which means it should be on Blu-Ray in another six days.

While they were in town for six weeks, I was unaware how much actually ended up in the movie. Cleveburgh was everywhere - doubling for Washington DC.  While the Avengers was partially filmed here, there was only two scenes (one extended) that were known to Clevelanders.  Winter Soldier there was much much more.

For me, that was the most exciting part.

Overall, I see it got good ratings (89% from Rotten Tomatoes), but I see it as all more of the same. Like the Avengers before (and the Star Trek reboot), there's lots of action and zero suspense.

Well....to be honest, I wasn't sure if the black guy was going to get killed or not. You know, in movies like this, it's always the heavy set guy or the black guy to get off'd in the movie. At least the character wasn't just one day away from retirement - that's always a dead giveaway.

I know people swoon over Chris Evans. I don't see it.  Scarlett Johansson has better appeal (and I would say she's getting a little better at acting too).  But has anyone bothered to tell Samuel L. Freeman (yeah, it's a joke......kind of) that he is a one-note actor? I get that you've nailed the role of 'angry black man', but c'mon.

The story was predictable, but you knew it would be. I mean, they're all back for the next Avengers movie. And they're superheroes. and no one sees a superhero movie where they don't save the day.

And Robert Redford? Does he have it in his contract for no one - and I mean no one - to touch his horrible fucking hair? The colour? The cut? The style?  It distracts you from his bad skin for about 0.8 seconds, but that's it.  But there ain't enough vaseline and gauze to make that look good.  Yes, it's petty, but I had to look at it in 3-D and paid extra for that. It doesn't seem like a fair trade.

I did get one thing wrong. The swarthy guy, who seemingly started off good in S.H.I.E.L.D. but wasn't, I thought would have a change of heart and turn on the bad guys.

I also passed time every time Cobie Smulders was on-screen, I pictured Billy Eichner running through the streets of New York screaming, "what's going to happen to Cobie Smulders????"  That made the time pass with a smile on my face.

And to add to it all?  If the scenes that were filmed on our street were actually movie, I missed it, though I'm pretty sure they ended up on the cutting room floor.

The movie was a fine way to pass two hours (plus!) on a chilly, rainy Saturday, but it is not going to win any awards (though MTV will give it something for some reason).

Song by: Jennifer Kimball
Posted by Blobby at 12:06 AM

I think the other people we seeing the movie for the 2nd or 3rd time. I haven't seen it either.

I crushed on Chris when he was the torch and in that movie with the cell phone and Kim Basinger but he's gone down hill from there.

I hadn't realized the movie was filmed in Cleveland, or Avengers for that matter either.

I did enjoy Winter Soldier and I wouldn't kick Chris outta bed (especially if he's wearing the tight t-shirt he wore while jogging).

I haven't seen it yet... I'll just wait until it's on Netflix.