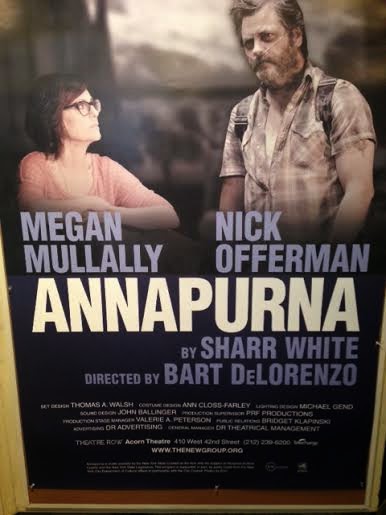 While sitting near Everest, it is roughly 2,500 ft shorter, though (in)arguably much harder to climb.

While several hundred people summit Everest each year (well, not this year, but....), up until 2012, only 191 folks have made it to the top of Annapurna.

For every three climbers who make it successfully up and down the mountain, one dies trying. Not great odds.

The same can be said for the off-Broadway play of the same name.

We had lots of Broadway plays to chose from, and while I like Neil Patrick Harris, Hedgwig and the Angry Inch appeals to me like dental surgery. Painful.

You know my thoughts (or should!) about Broadway musicals:  mediocre music forced into banal story lines over-sung by overrated "artists".

So, when a two-person play with Ron Swanson and Karen Walker real-life husband and wife, Nick Offerman and Megan Mullally, playing an ex-couple was offered, it sounded more appealing.

But I can't say I was wow'd.  Hell, I even dozed for a few minutes here and there.  C'mon - a two hour play, no intermissions, right after lunch?  They didn't stand a chance.

I don't know if it was supposed to be somewhere between the Day of Wine and Roses and Who's Afraid of Virginia Woolf ? with a hint of humour - but that's how it kind of came off.  But not in a good way.

I think there were only two or three questions asked by Offerman's character - most of them asked in the first 10 minutes. No answers. No direct answers at least, until the last 10 minutes.

And Mullally had a few too many Will & Grace mannerisms.

Both players are much better as another ex-couple on Parks & Recreation:  Ron and Tammy 2.

I get that it's "drama" and to answer the questions succinctly or even remotely timely would make for one short play, but honestly it sounds like the playwright had nothing to truly say between the questions and answers. And no normal person would put up with never getting the answer to a simple question.

Yes, there is a reference to the mountain, Annapurna, and an analogy to the character's relationship.

Overall, it was an ok afternoon distraction, and it still beats having to see a revival of Cabaret, Hedwig or Les Miz.

The only thing I really knew about Annapurna was that was what Julia Roberts was going to climb on her honeymoon with Christopher Meloni before the bride ran away. I didn't know it was a mountain they were talking about, I thought it was Chris's (he lets me call him that) ass.

Perhaps a little Jack McFarland would have helped?