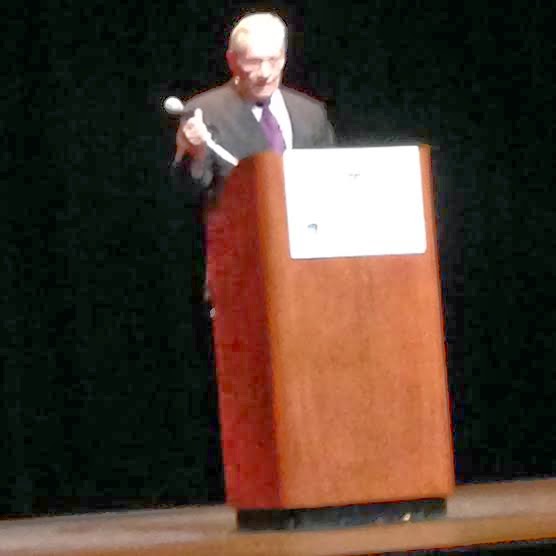 A few rows back and with an iffy iPhone shot and you'd think I was watching Dick Cheney give a speech.

He was at the Town Hall series and one of my former bosses called me on Saturday to axe if I wanted his tickets.

Sure. It beat going to see the Capital Steps.

I thought Woodward would be more interesting. He had the potential to be, even without ever mentioning Watergate.

The man was there to talk about his new(er) book the Price of Politics.  Woodward may be a good author but he's only a so-so speaker. But being an investigative reporter doesn't necessarily make him objective about what he writes.

This book is his second (!) on Obama. Two books in just over one term in office (it came out in Sept 2013) - so I'm not sure (well, actually I am) that there is time for perspective. But he had few nice things to say about Obama, or Hillary or Carter and Harry Reid. While he didn't praise Boehner, he certainly had nothing bad to say about him. Ditto for Reagan, Bush and Bush.

I mean, this is a book about gridlock in DC. To not even acknowledge that the GOP is  part of that gridlock is absurd. But he puts it all on Obama not being able to pretend to be nice to both GOP and Democratic congress folks. Though he thinks Obama is, at heart, a very nice man - but he doesn't use the power of the presidency to get things done.

The one decent thing he said, but I think was too late into the talk to matter was talking about Obamacare. He asked how many in the audience thought it would and would not work. It was about half and half.

But Woodward equated it with the Cold War. It took 40 years to work through until it was resolved. He shot down both the left and right on their claims that Obamacare has succeeded or failed. He said it won't be years until we know.

Of course, if the Dems don't win in 2016, the GOP will dismantle the ACA (that is me speaking, not Woodward).

I was more put off that he basically, but nicely, trashed Obama and never really talked about true gridlock. He did nothing to make me want to go get or read his book.

Before the start of the program, you're asked to submit questions for the Q&A afterwards - and only a fraction of people submit and they never ever ever get to four that are read. And they didn't read my hastily written one.

I really do have horrible handwriting and printing.

I also meant to put quotes around "bug".  It was a little Watergate joke.

Well, it was free and it was a night out with 710 - and on a Monday. I can't really complain. It was something different to do.  And it wasn't the Capital Steps.