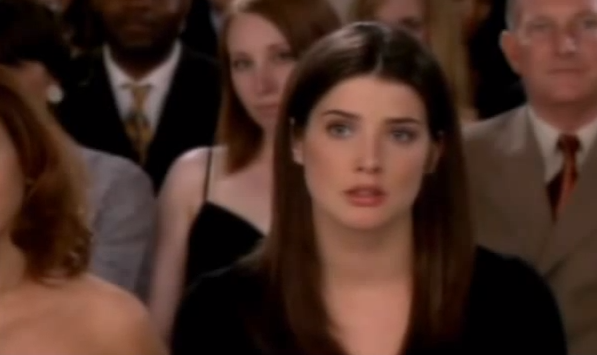 Blobby has a short attention span. Kind of like his "friend" whom we won't mention by name.

No, it's true. I might or might not have some ADD complexities to my life, which is ironic, since I do love intricate things, in certain ways.

Brits probably have it right that their TV seasons last about 6-8 shows. None of this 22 bullshit.

I can't keep interested for that length of time - and usually, the creators cannot keep it interesting for that long, let alone for years, or years in a row.

My attention span is the sitcom. It just is. 22 minutes. Hour long dramas rarely happen.

Sure I like Cosmos and documentary shows that are longer, but stuff like Downton Abbey even has me wanting it to end sooner than later. I'd drift in and out of Lost, eventually just letting 710 give me the 50 second recap, so I didn't actually have to watch it after season 2.

As for sitcoms, you've heard me talk about Veep, Girls and Looking. Maybe I can usually only stand one word titles too. Maybe that's why it's a little surprising that I loved How I Met Your Mother.  Due to the length of the show and title.

After missing most of the first season, we somehow stumbled upon it and caught up during summer reruns. Still, nine seasons is a long time to watch or follow anything. Thank you DVR!

But unlike most sitcoms, long running or not, HIMYM was consistent. Same writers, the same director (for every single episode), no major cast changes. Their guest appearances were usually well done (ok, maybe not Britney Spears or Katy Perry). Even the longer running ancillary casting was well done.

The beauty of the show, for me, was the intricacy. There were long-running story lines and jokes that spanned episodes - some not even showing up again for months or years, which works because they're big on flash backs and flash forwards. Unlike most sitcoms which are normally stand alone episodes, you have to kind of pay attention in each one, as many a reference would pop up later.

As the years went on, the show was good about explaining them or bringing them into context. For the most part. I wouldn't go as far to say it was a thinking man's show, but it wasn't Friends either.

Each of the main characters were strong and it says something that the show wouldn't have worked without all of them.

Many of the shows were extremely creative - one being a  time travel episode where a 20 years from now, 20 minutes from now and current time Barney and Ted exist at one point in time - and then of course there was the Playbook episode too. Even the sadder shows - like Marshall's father dying and the subsequent funeral were well done.

It didn't hurt that Ted was a half-Jew from Shaker Heights and they clearly used real life locations in their conversations (the Wendy's at Van Aken plaza).  ...and of course there was Canadian pop-star, Robin Sparkles.

But it's over now - the series finale airing earlier this week.

The intertubes all aflutter about the ending and how unsatisfying it was. But in reality, you could see it coming a mile away, and you really can't please everyone. It really wasn't that bad, though they sped through 18 years in 40 minutes (where as the rest of this season took place over a weekend).

My problem wasn't as much with the full circle ending as it was one of those reference moments that were shown over the years - the one depicted in the title image.

By the end of season one, we find out "Robin" is not 'the mother'.

The title image shows Robin at Ted's get wedding. They bring this moment back often - or at least every time Ted and Robin break-up. Yet, it was the one running item the creators fucked up on, as Robin is on the far right at Ted's wedding in the finale......here. 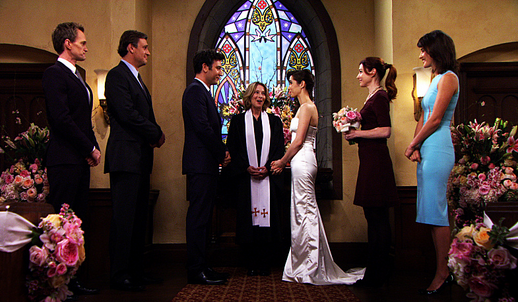 For any other show, I'd say no one would notice or care about this oversight, but it's been bugging the fuck out of me.

For a show that prided it self on this kind of minutiae, it surprised me they'd overlook something that was almost so fundamental to the framing of the will they / won't they ever be together.

I laugh at the intertubes being so bent out of shape over the actual ending. Honestly, I don't know anyone but 710 and myself who ever watched the show. I always was amazed that it kept plugging away with mediocre ratings, but still had high production values - well, except for that wedding snafu......and Bob Sagat.

Of course now I can laugh at Billy on the Street going on and on about what will happen to Colbie Smulders. That eases the pain.

I was very surprised when my 25 yo nephew asked me how it I thought it would end and about the rumors that he was telling the kids how they met after the mother died.

I would have liked a little more time spent after the train station and not rushing through 18 years but I thought making the final season just about the wedding was done rather brilliantly.

Janie loves it.
And thbbbbbt!! Or was the ADHD reference to Morty?