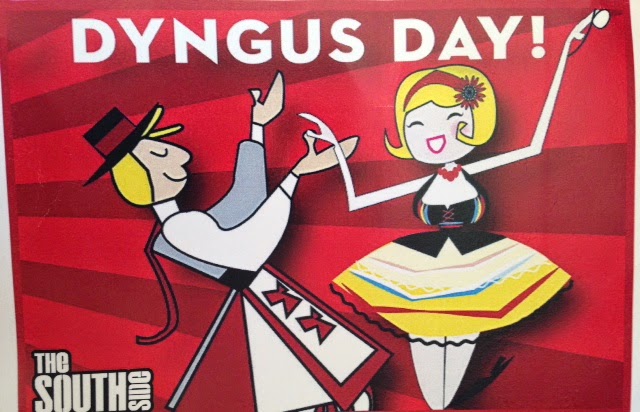 Since I don't care for zombies, it's fairly safe to say I don't watch the Walking Dead, nor am I a big fan well, you know.....Easter.

I would think if Jesus Christ were my personal saviour, that he'd do more than rise from the dead in the form of a bunny and hide eggs and provide candy in baskets.

I mean, that is what happened, right?

So, I'll talk about Dyngus Day - which to be honest, I didn't even know existed until a few weeks ago when having lunch down in a "certain ethnic*" part of town.

There were fliers up everywhere for this so-called Dyngus Day - or as some I guess refer to it as Easter Monday (which is tomorrow, but this ain't important enough to vacate a My Music Monday post).

I have to say that I've lived most of my life in Cleveland, which has a large "certain ethnic" population, and have never heard of this day.

Let me just say that 710 got on his magic pocket phone machine and looked up this "holiday".

And let me just say, that between the Salem Witch Trials, Easter and Zombies, Dyngus Day ranks up there with some fucked up days of celebration.

"Traditionally, early in the morning boys awoke girls by pouring a bucket of water on their head and striking them about the legs with long thin twigs or switches made from willow, birch or decorated tree branches.

Throughout the day, girls would find themselves the victims of drenchings and leg-whippings, and a daughter who was not targeted for such activities was generally considered to be unattractive and unmarryable in this very coupling-oriented environment."

Resurrections and eating brains seems more in line with normalcy than this.

And yet the Polish people get offended when you tell the landscaper joke of "green side up"??

* Hoolihan & Big Chuck - later Big Chuck & Lil' John - used this term, as they didn't (couldn't?) use "Polish". It wasn't meant to be derogatory as Big Chuck himself was Polish.

And so THAT'S a celebration?

So... is that how you were awakened this morning? Does 710 really swat at your legs all day long? I be your patience is wearing thin by now. ;)

Actually, I find the prospect of the promised accordion parade a more frightening prospect.

As for the aspects of the tradition of humiliation and flagellation, I'm sure that they were doing the best that they could in the absence of a suburban American high school and it's coterie of Mean Girls.