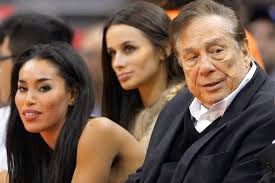 I think, as a blogger, I am contractually obligated to discuss Los Angeles Clippers owner, Donald Sterling.

I find it hard to believe that the allegations against him, at this point, are false, but I noticed no one took a nanosecond to even question them - media, "celebrities" and sports figures alike. Apparently because TMZ says so, it's fact.

And it might be. I mean, he was sued for keeping minorities out of his real estate deals.

But in the 24 hour news cycle, as I've pointed out, everyone is guilty until proven innocent. It's no longer the other way around, nor has it been for quite a while.

And it seems the über-rich are different than me and you.  Or at least me.  You 1%-ers are loftier than myself.

I can't give my black-Mexican girlfriend a Bentley and Ferrari and cash while my wife is seemingly aware.  But that's only because I don't have a girlfriend.

The man has balls though - and not just basket ones - as he rubs the fact in his wife's face, as he sits with his mistress at courtside.

Personally, I find it hard to believe that 30 years of owning the team that this is the first he's made a comment. Racism usually doesn't just come to the surface after that amount of time. It's there. Usually always.

Why he had a mixed race girlfriend is beyond me.

Why he owns a team in a sport, where the players are predominantly non-white, and that big of a supposed racist, is also beyond me.

It must be for the cash. People have done worse for less.

I'm no fan of Magic Johnson (oh, I don't want to hear it), but that's mostly because of his crappy theater chain, so I'm not sure I'd want him coming to my games either - but that's not quite the point. I do love how Sterling thinks there is a difference between white Jews and black ones.

I think the difference is that Sammy David Jr. is dead.  That was THE one, right?    (oh step down people, it's a joke!)

The sad thing - in a way - is that the NBA is so willing to act on this immediately, possibly even making Sterling give up his ownership of the team. But in the past have only given minor penalties to players using similar language, if you substitute 'black' for 'gay'.   ...and by 'gay', I mean 'faggot'. No suspension. No termination. And not even their first offense.

If there are other situations of Sterling saying things like this, why didn't the NBA act then (bc TMZ didn't report it to the world?).  If this is his first case - I guess the NBA thinks saying 'black' is a lot worse than saying 'faggot'.

But then there aren't a lot of "faggots" playing for the league.   ....at least that they know of.

And please do not discount me even writing this without the probable premise that I could somehow sneak in a video clip of Blake Griffin, who plays for Mr. Sterling's team. It might have been the only reason I wrote the post in the first place.

Not so ironically, Kia was a sponsor of the Clippers and they have suspended that relationship, at least for the time being.

I don't know what Mr. Sterling thinks of Griffin, since he's mixed race. But I'm down with him.

What have you got against Magic Screens???

I could be your girlfriend.