Remember yesterday when I was wringing my hands on what I was to write for today?

Well - I never really came up with anything, so I'm going with my Site of the Month.....which I stole from Tornwordo's FB page.

It is a Countries of the World Quiz.   ....and I might not pass a geography course if actually put to the test...

...welllll....unless it was graded on a curve. Even then I'd barely eke by.

Now, for full disclosure, I took the test twice. I was three-quarters into it the first time when I realized you did not have to click on the country and then type in the name.  Well fudge - now you tell me. I lost a LOT of time.

So all you have to do is type in names and keep going. It's a time-saver.  So the first time I only got 64 countries.

Once I figgered it out, I took the test a second time. Hence the 55%.  Though almost 74% beating others who have taken this quiz - though that latter percentage did factor in my previous low low low score. 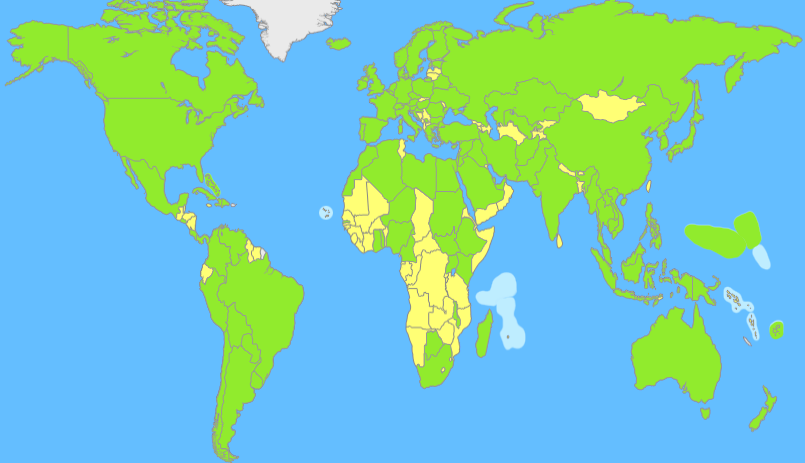 If you look at it like this, it looks like I did very well.  But those pesky African countries, Asian ones and a few South and Central American ones kind of threw me. And there are a lot of them, even though it doesn't look like it.

And what the fuck is up with Greenland?  Typing in "Greenland" is not even a choice. I even tried typing in "Lapland", just in case. I got nothing.

Now a few caveats - though I'm not letting myself off the hook.....spelling counts.

Yes, I wasted time trying to spell "Uzbekistan"....multiple times. And yes, I didn't know there was a difference between Samoa (which I got) and the Samoan Islands (which I didn't).

I'd bet most of us who read this blog-thing don't know from Andorra (no, not Samantha Stevens' mother) or Djibouti.

Where I'd remember something obscure like the Marshall Islands, I'd forget Sri Lanka. I'd get Camaroon, but blank on Guatemala, Tanzania or Tunisa.

I'd like to say I ran out of time, and in a way, I guess I did, but everyone does. There are only 12 minutes on the clock.

But even with losing time by respelling things, I really ran out the last 1:40 trying to figure out the other 88 countries.    ....and half of that last 1:40 I would type in things and get the message back that I've already submitted that country.  In that time frame, I'm not sure I added 2-3 more countries.

I didn't want to skew results by taking the quiz again - as the program will tell you what you missed. And if you scroll down while you are taking the quiz, it fills in your correct selection by continent and alphabetical on a chart    ....so I guess you could deduce what might be missing. I just didn't see the list at first and saw it as a form of cheating.

But go ahead. Take it for fun. At least you know Tanzania, Sri Lanka, the Marshall Islands, Guatemala and Camaroon are on the test.

Just not Greenland.
Posted by Blobby at 12:01 AM

In just the one attempt (and after wasting nearly 3/4 of a minute before getting started) scored 100 (= 51%).
Feel a bit disappointed as I didn't have time to get to any of the Caribbean countries and even one of the rest of the small island nations but, hey, that's the test!
So I bow to your superiority - and, no doubt, to that of several others of your blog readers. But good fun nevertheless.

It looks like you've gotten around quite a bit-- much more than I thought you had.